You will notice a trend with this car, it fights me, and i haven't even gotten to some of the problems. The car went back to the painter and had the body fitted. With custom fiberglass builds it's always nice to give the fiberglass and filler time to shrink up and settle before painting. Having owned the car in Red, Red/Silver, Red, White, and bare frame the car was to be painted Lotus Laser Blue. To get an idea while the body mods settled some blue was added to the primer and we had this: 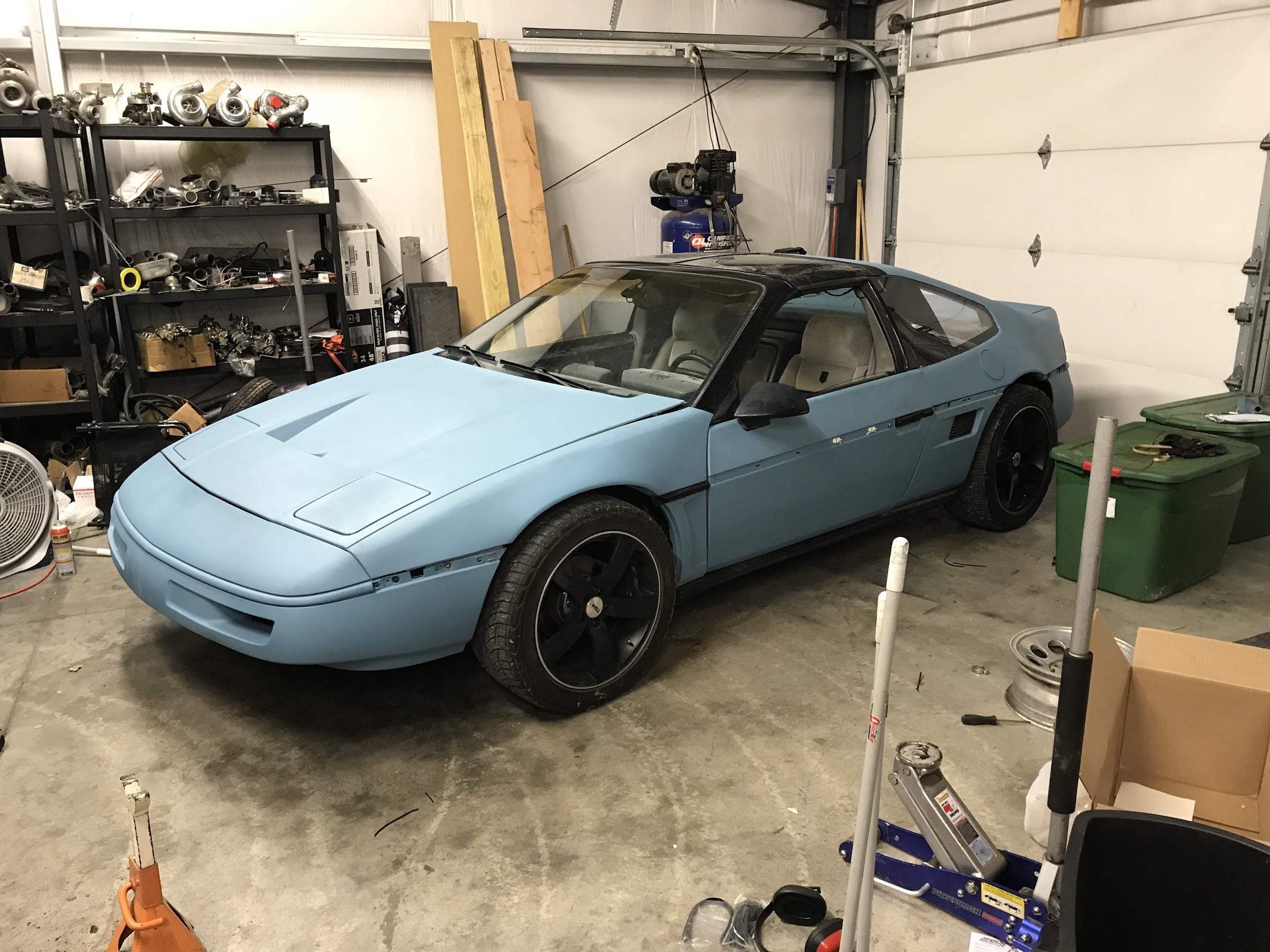 The hood vent was created using a cut down spoiler stand to give an OEM style curve and shape to the bracing: 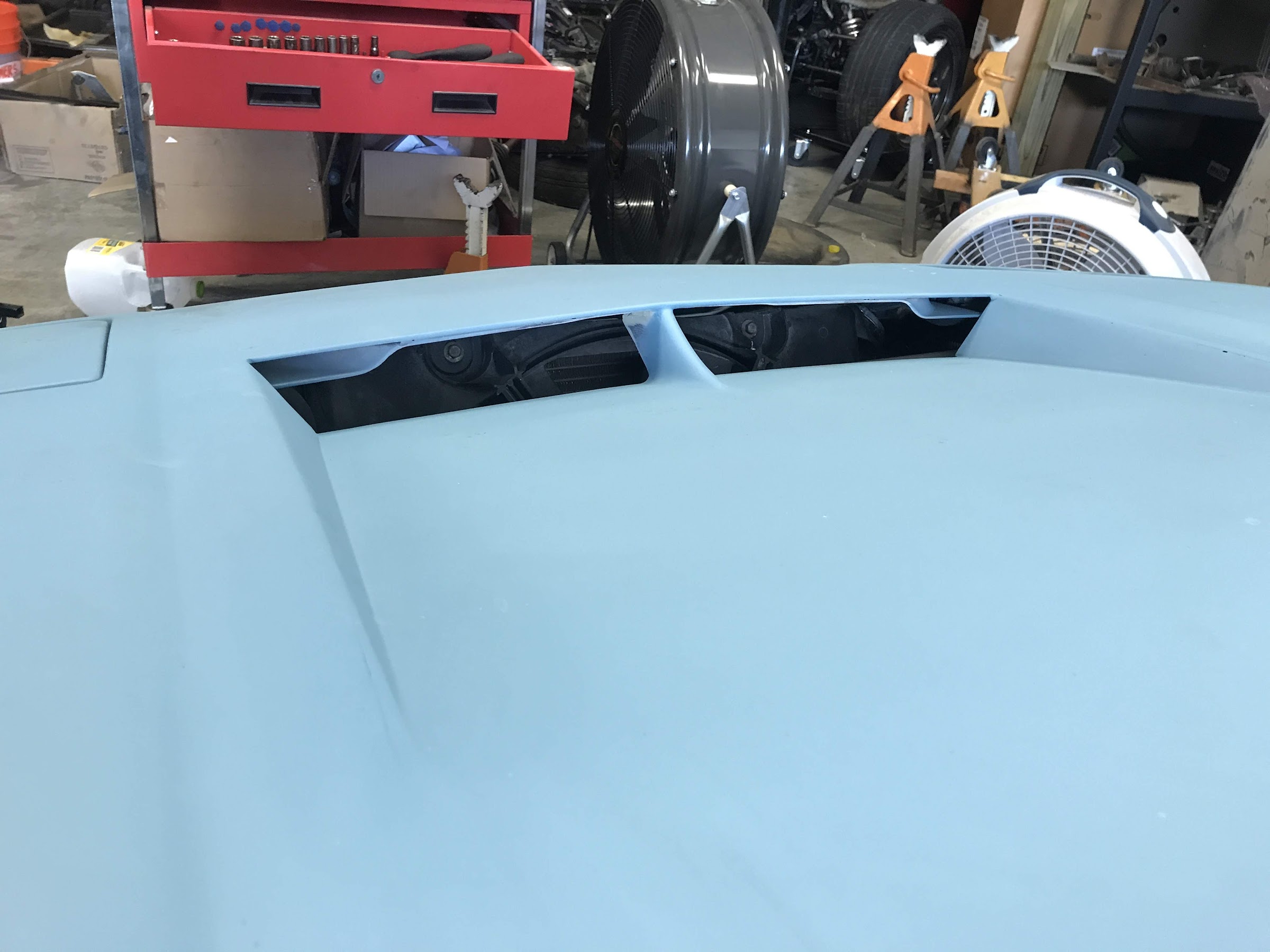 The new spoiler was made by building out the shape in balsa wood and laying the fiberglass over the forms. The spoiler was integrated as a 3 piece system, being built into each side of the rear clip and the decklid: 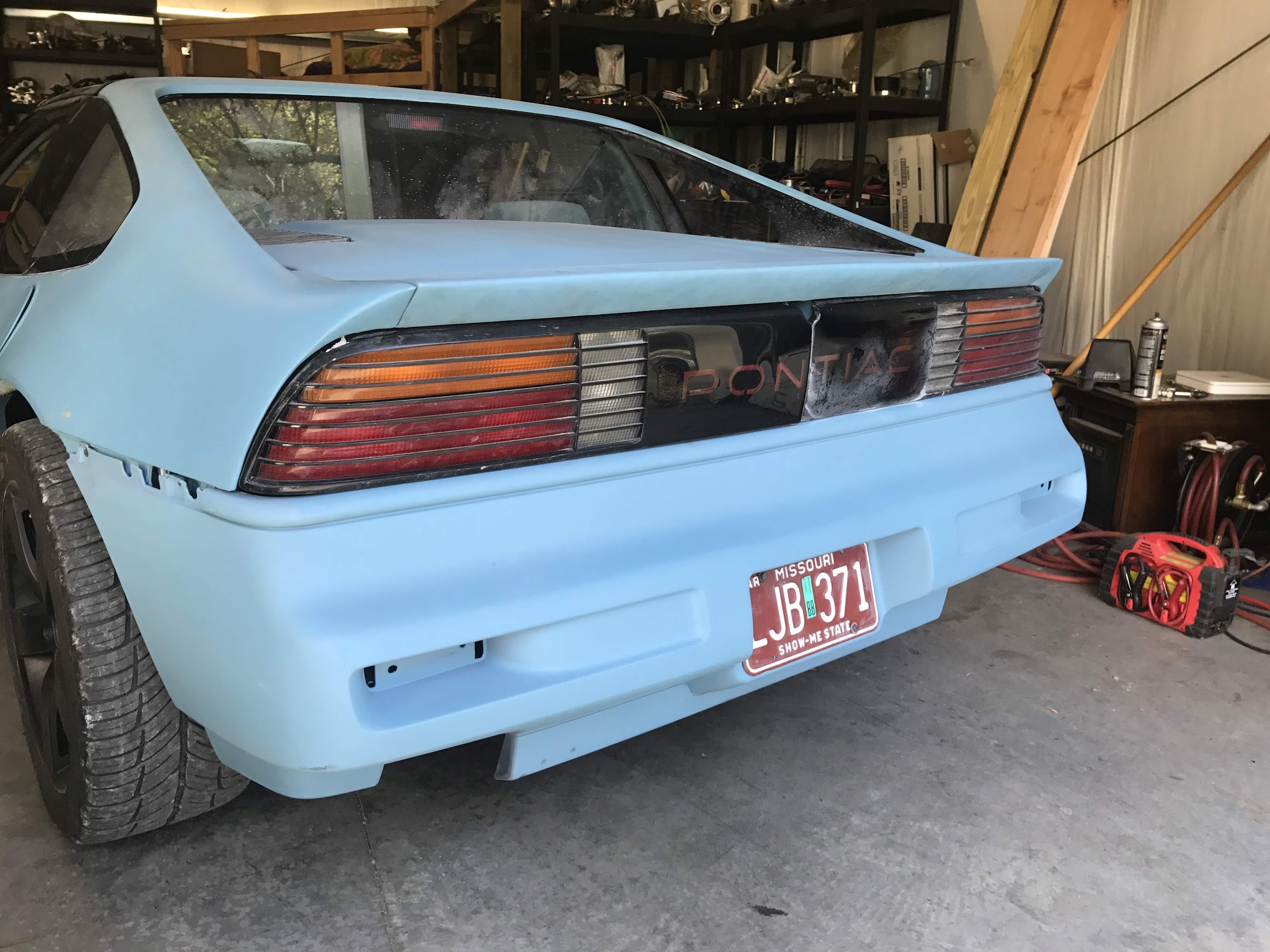 The body on the Fiero is mostly made of SMC, which is similar to fiberglass but mixing the two doesn't always work. So to widen the body the painter cut down a second set of fenders for all four corners from another fiero and bonded them into the panels. This allowed for 2" of widening on each side of the front and just over 1.5" of widening on each side of the rear. Until the final wheels for the car are found bolt on adapters are being run in the rear and longer studs have been fitted to the front for smaller adapters.

Now comes mechanical problems. The motor I used in the car was second hand and ended up needing a set of crank bearings: 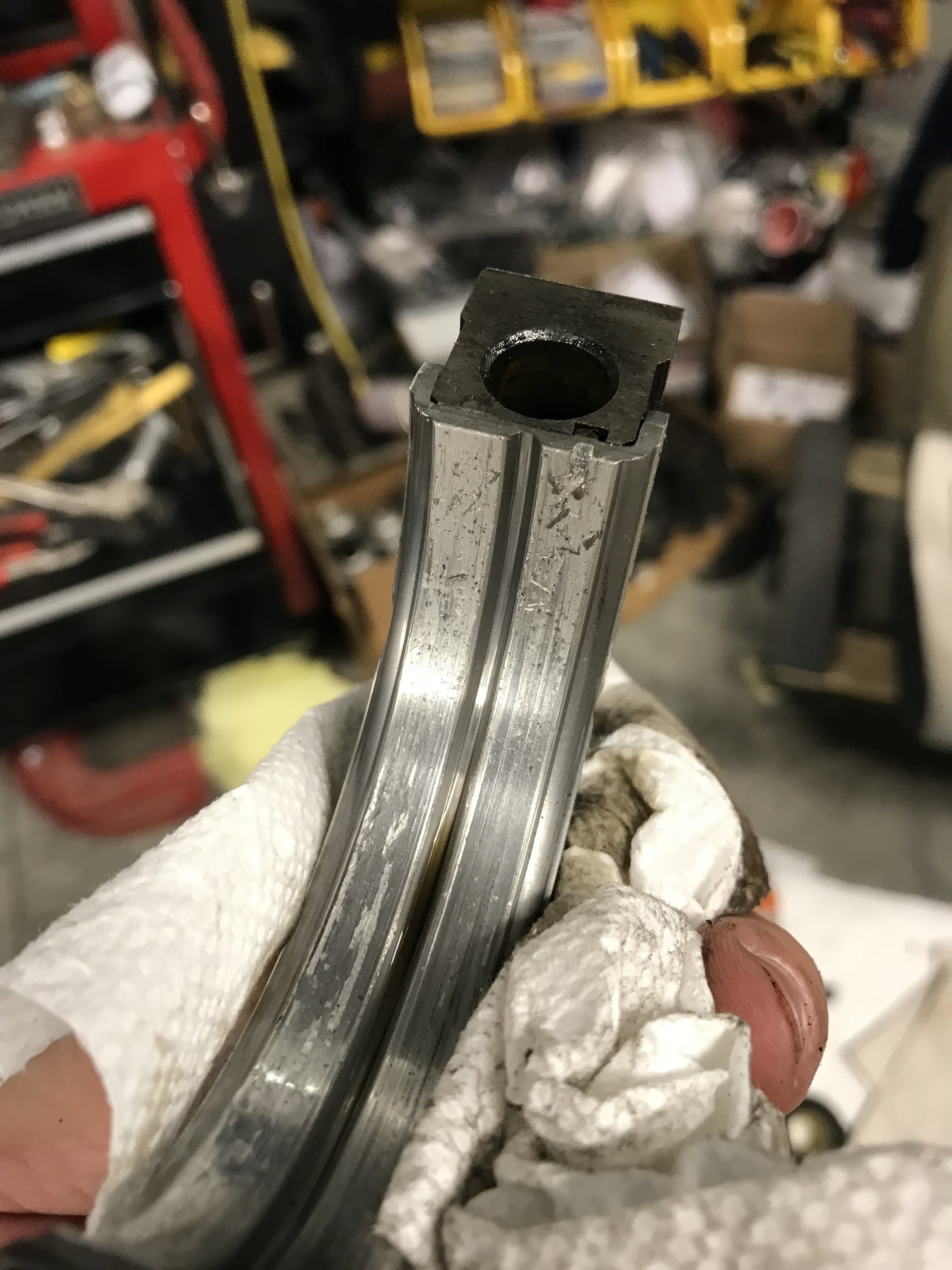 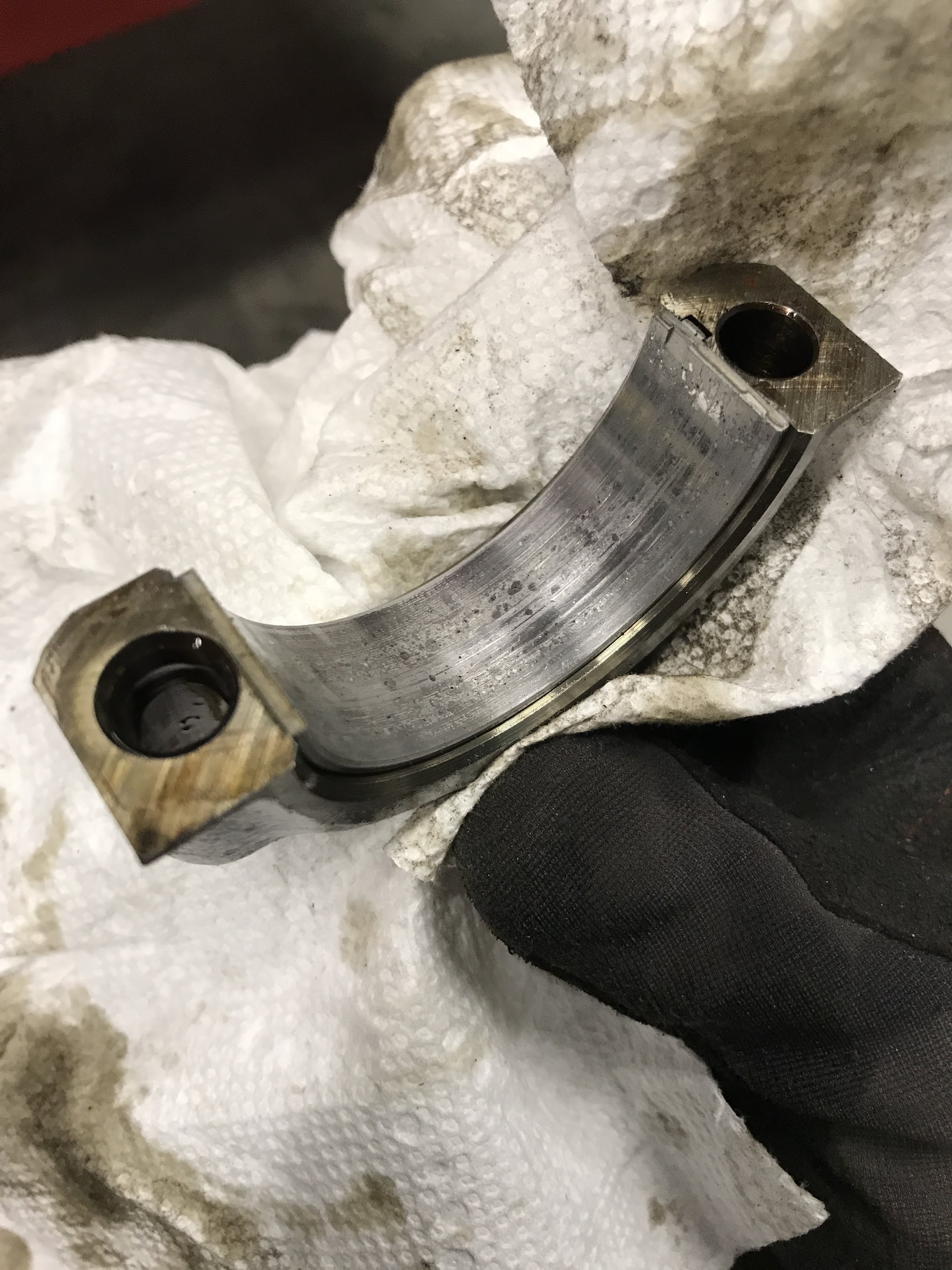 Back together and the car started having issues with the undersized turbo, boost was coming on too quickly and even with the waste gate flap open it would build 3-5 pounds of boost, the turbo was undersized for a 140hp 2.8l that peaked at 4500rpms, putting it on a 170hp engine that peaked at 6000rpms was questionable at best. The next best thing was found, well it really wasn't the best thing for the car, but it was local and an upgrade. A twin scroll JDM spec 2.0l Legacy turbocharger was purchases and installation began. We started with this: 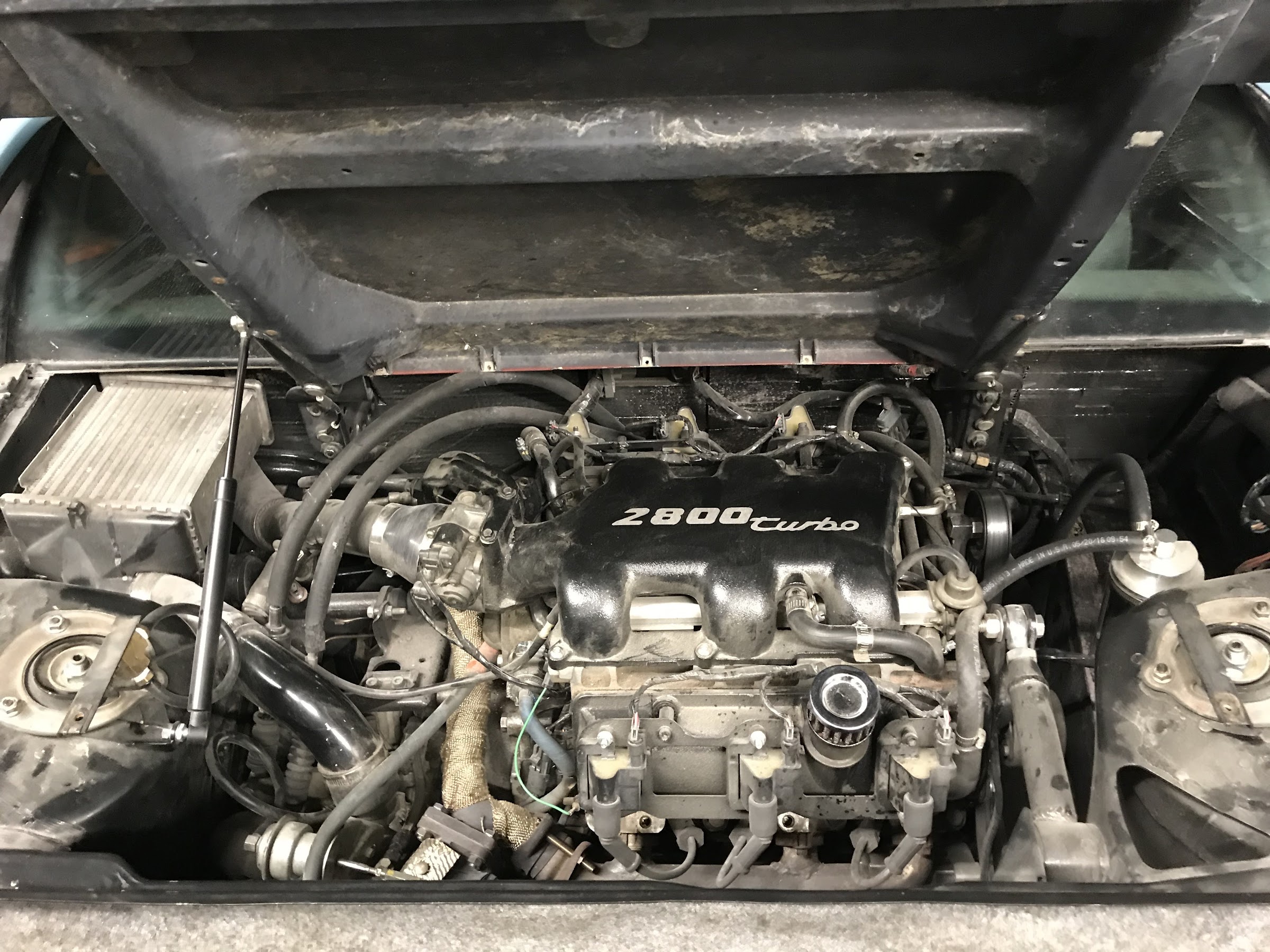 Wanting to keep as much of the design the same and the new turbo not being much larger the only change we tried for was to bring the turbo up higher to make it a little more visible. With a clocking of the compressor housing the turbo was already looking right at home in the engine bay: 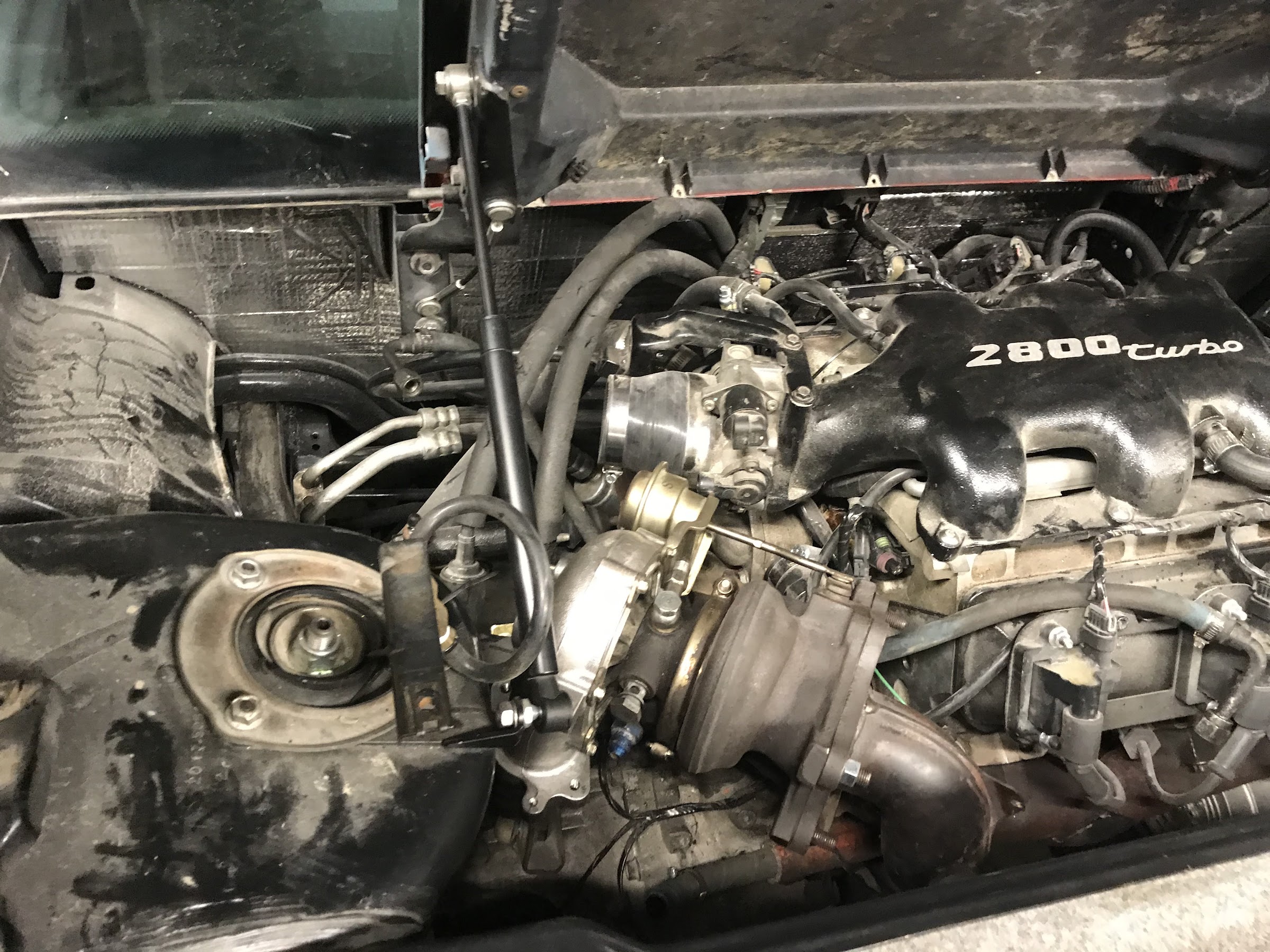 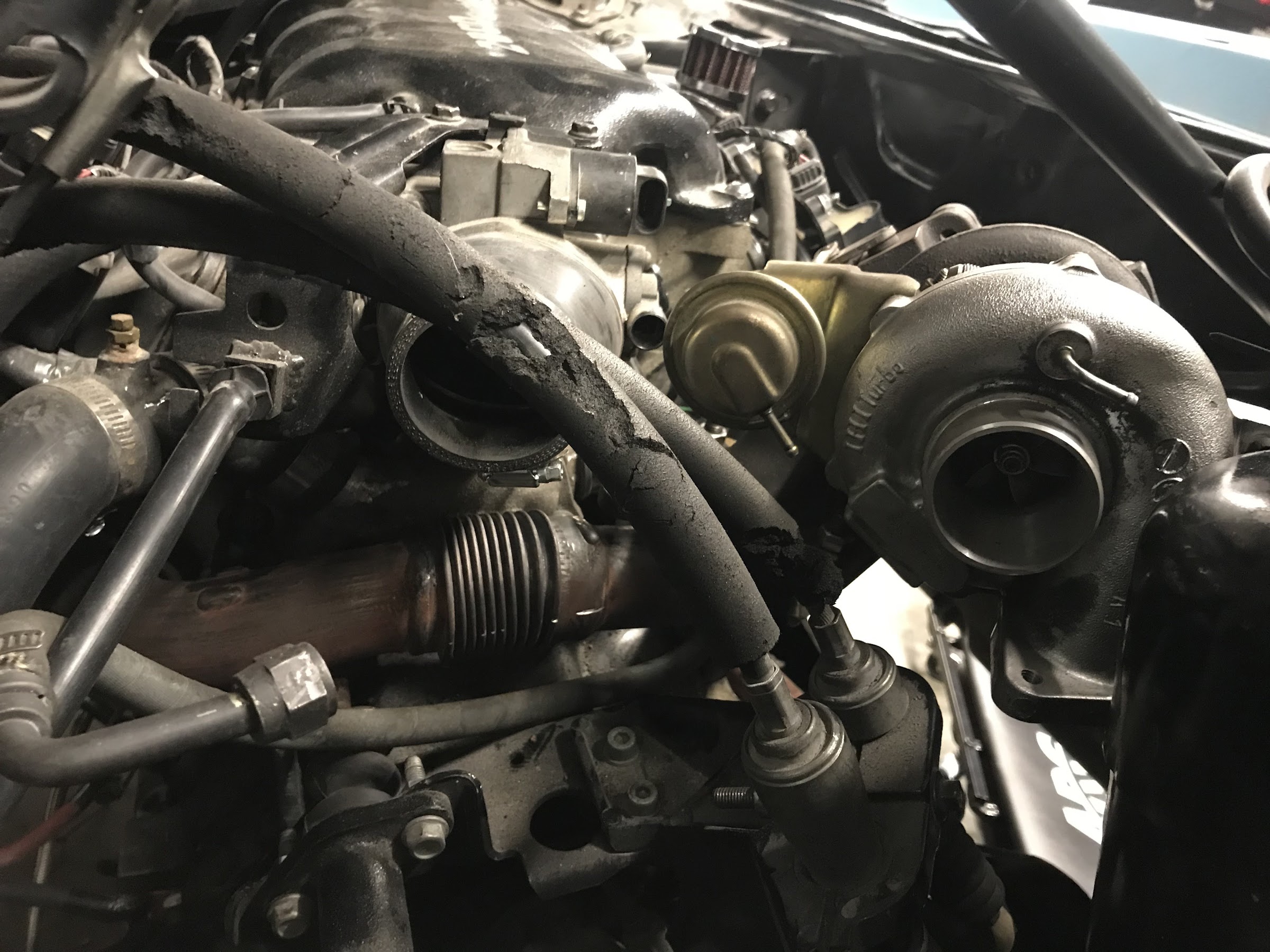 This turbo utilized a twin scroll turbine housing having separate inlets for each bank of cylinder, it also used a dual waste gate port allowing each scroll to vent independently. At this time we also switched from the stock fiero tube steel exhaust manifolds with the small circle ports to the second generation cast manifolds with the large circle ports. The crossover pipe was simple and too the point, given the turbo placement the exhaust length would never be equal, but with how the turbo ended up spooling up it wasn't a problem at all: 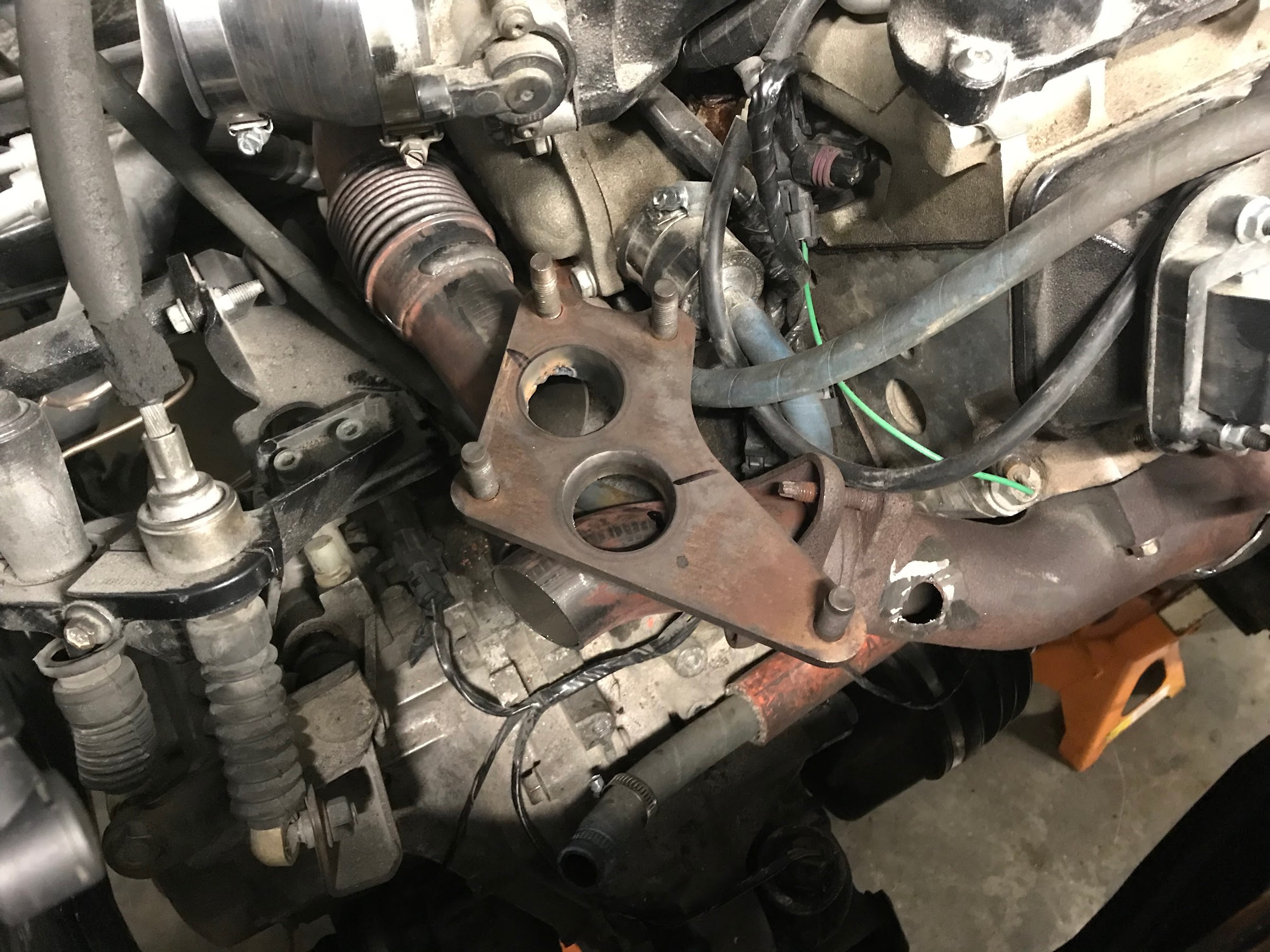 All buttoned up with a new downpipe and the car was making boost quickly but not running out of steam like before: 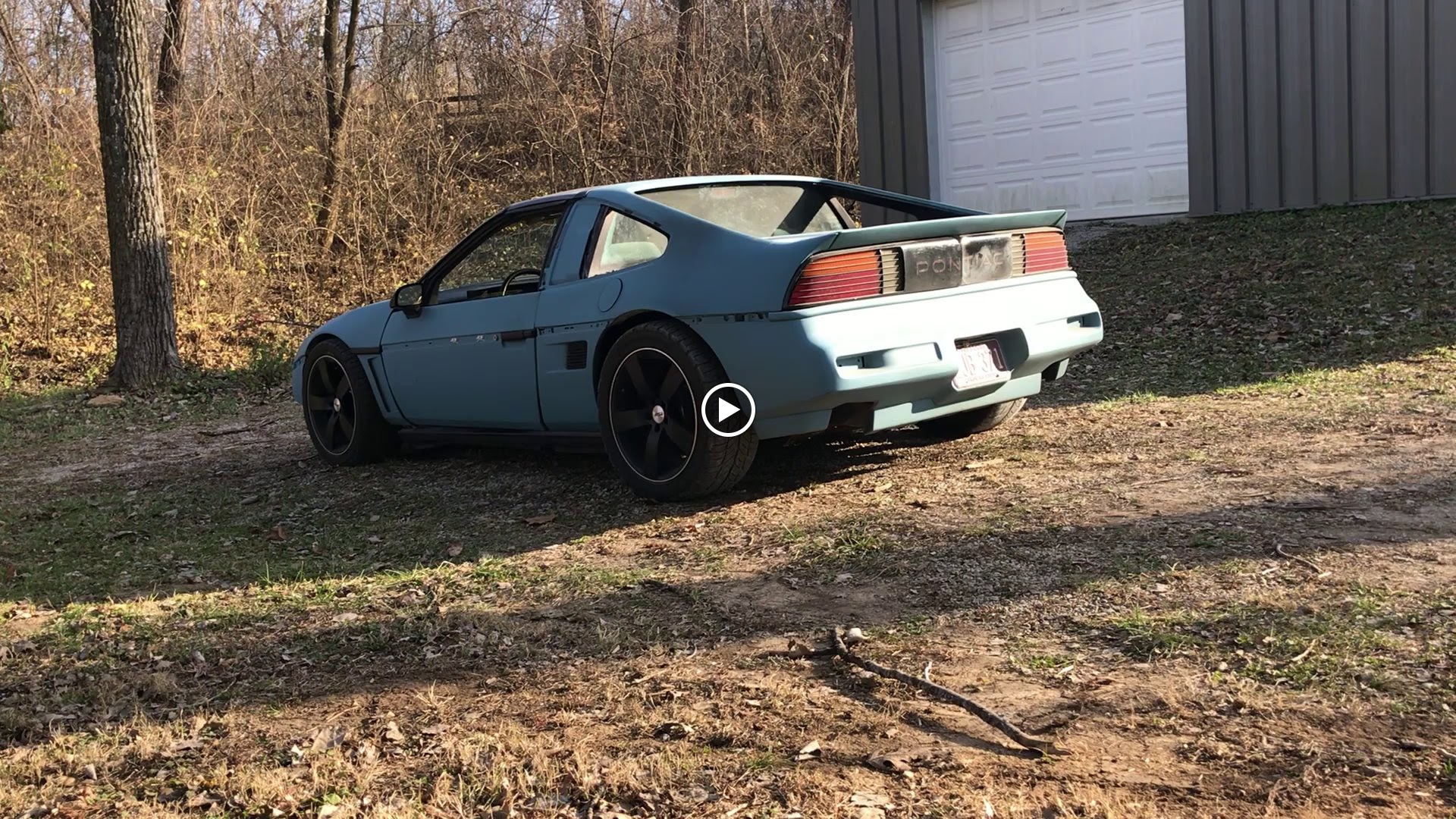 But it still had issues, back and forth testing on the Microsquirt install never really netted the car having a full rpm range with smooth power delivery. Fighting with the motor cutting out and playing it safe I enjoyed the car as it was and just kept testing things. One day with another test and some revving in the driveway netting a very aggressive upper end knock, a lifter had collapsed. The motor still ran but I was done fighting with it. Before this one of my personal goals for myself was to pull a car into the garage, take the motor out, replace something major, and have the car pull back out of the garage the same day. It was decided, the Fiero was going to have the motor replaced and be back on the road the same day I pulled the 2.8l out. I found a 3400 SFI V6 a third generation evolution of the original 2.8l and the 2.8l that was currently in the Fiero and it was torn down to be ready. Gaskets refreshed and the motor making good compression the Fiero was brought into the shop one morning and the tear down began: 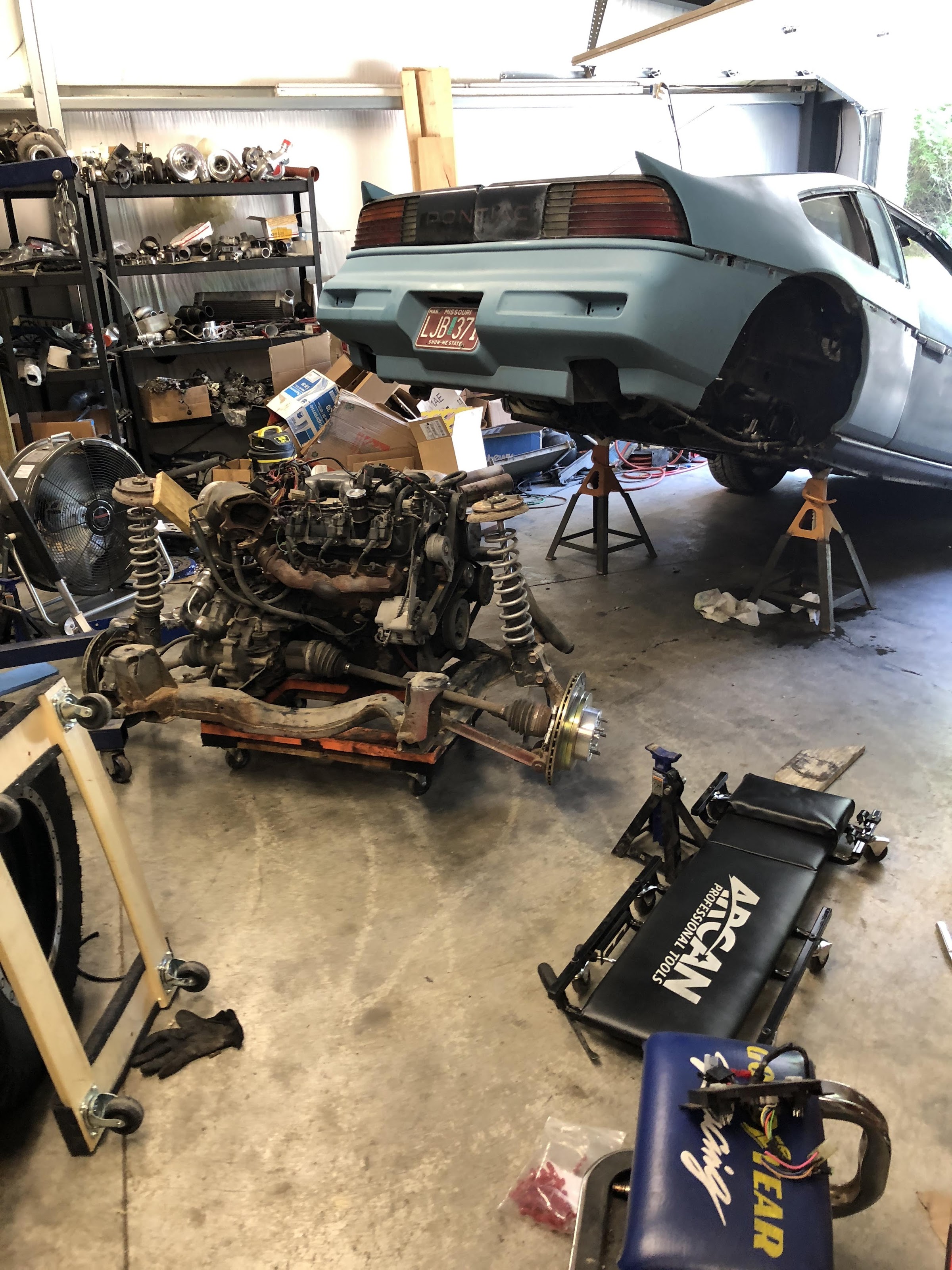 If it was a bolt in affair it would have been done by dinner, but that wasn't the case. The 3400 used a structural oil pan that interfered with the engine mount bracket and required extensive trimming. The newer block used extra webbing and a cast in place AC compressor mount that interfered with the compressor that was on the 2.8l. This also forced a new belt routing to be sorted along with a new idler pulley bracket built: 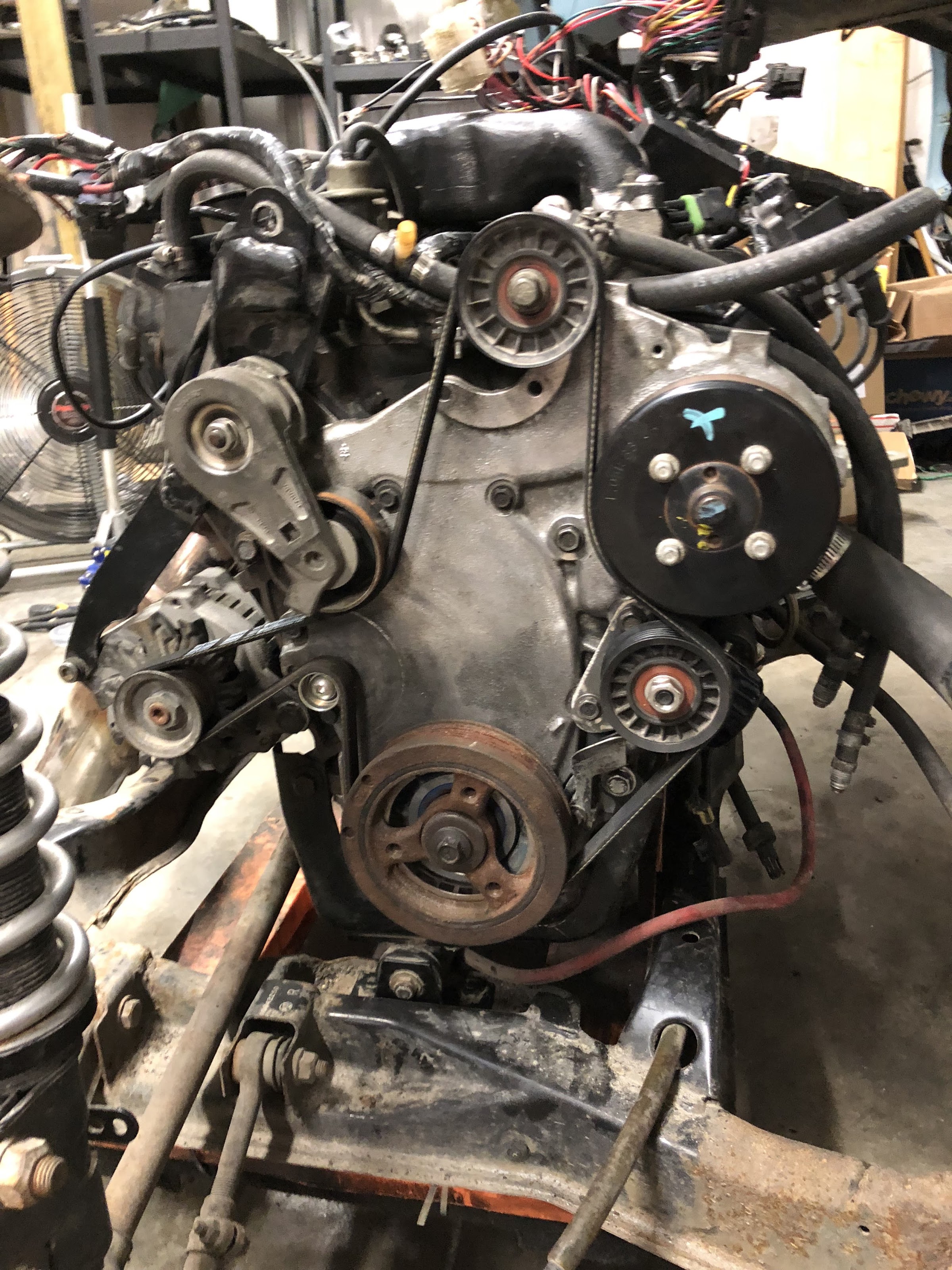 Sadly by the time it was designed the parts store was closed and the dream was dead. The next day the belt was installed and motor reinstalled and the car drove out the door with a new engine. The valve tick was gone, and the motor was stronger out of boost but the rpm cuts persisted. Time passed and with the problem not solved it was too late, the car needed to get to the painter to have enough time to spray it down for the 35th Anniversary Fiero Show. It turned out great, the Lotus color worked so well with the body lines and the wide body and still driving well enough it was on the trailer and headed back home just days before the 350 mile trip to East Peoria, IL: 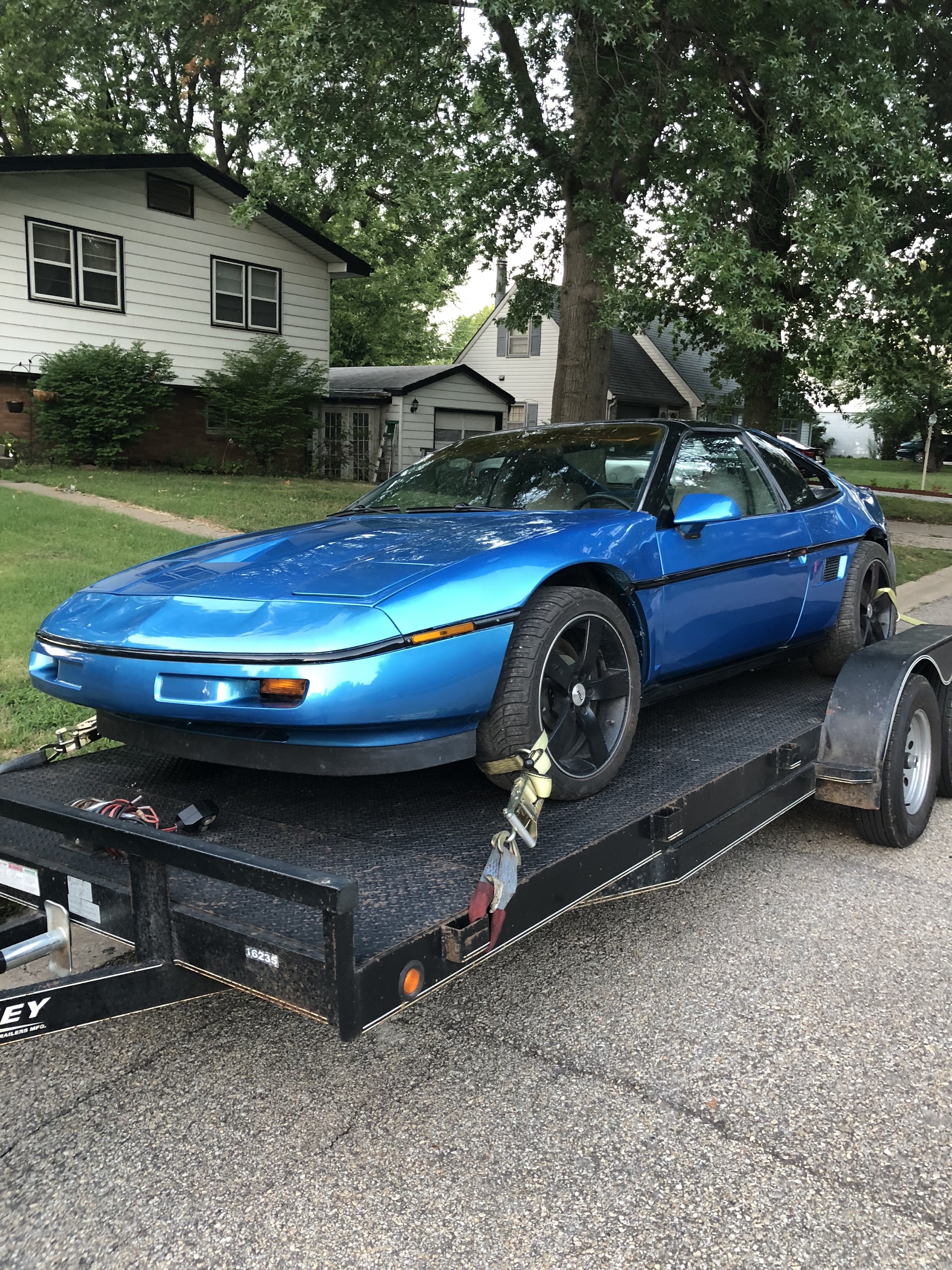 Honestly it stayed on the trailer until it was time for the trip, and as most people with a new toy, pictures were taken every time it looked good: 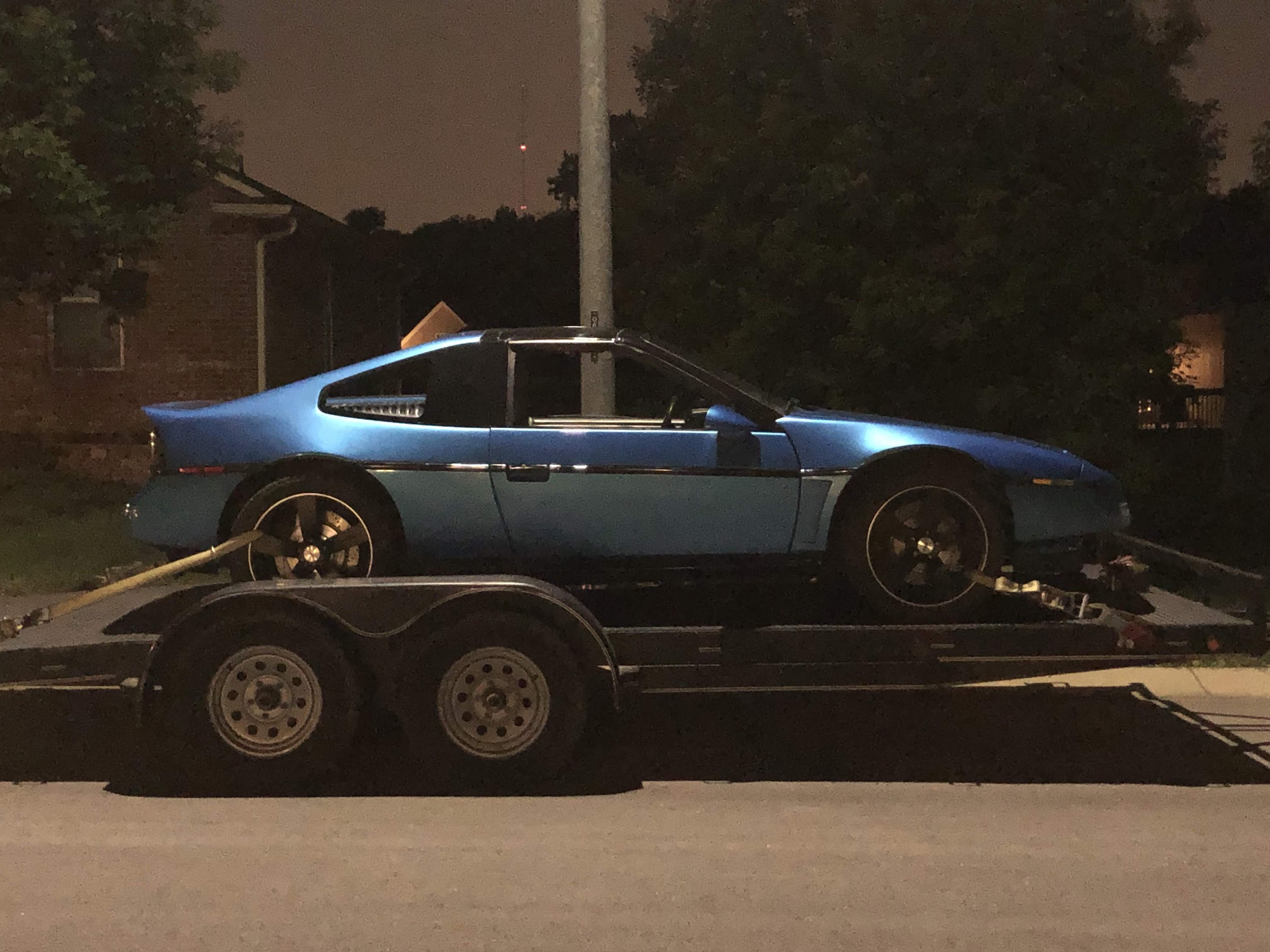 Half way to Peoria the car decided to give a piece of its heart to save another. A 3.4l swapped Fiero in the caravan lost its crank position sensor(which wasn't used in their install) and was spewing oil rapidly. The Ttop being on the trailer the part was quickly pulled and installed in the other Fiero and we were back on the road. A new sensor was purchased and the car drove around the event weekend being babied like it always was: 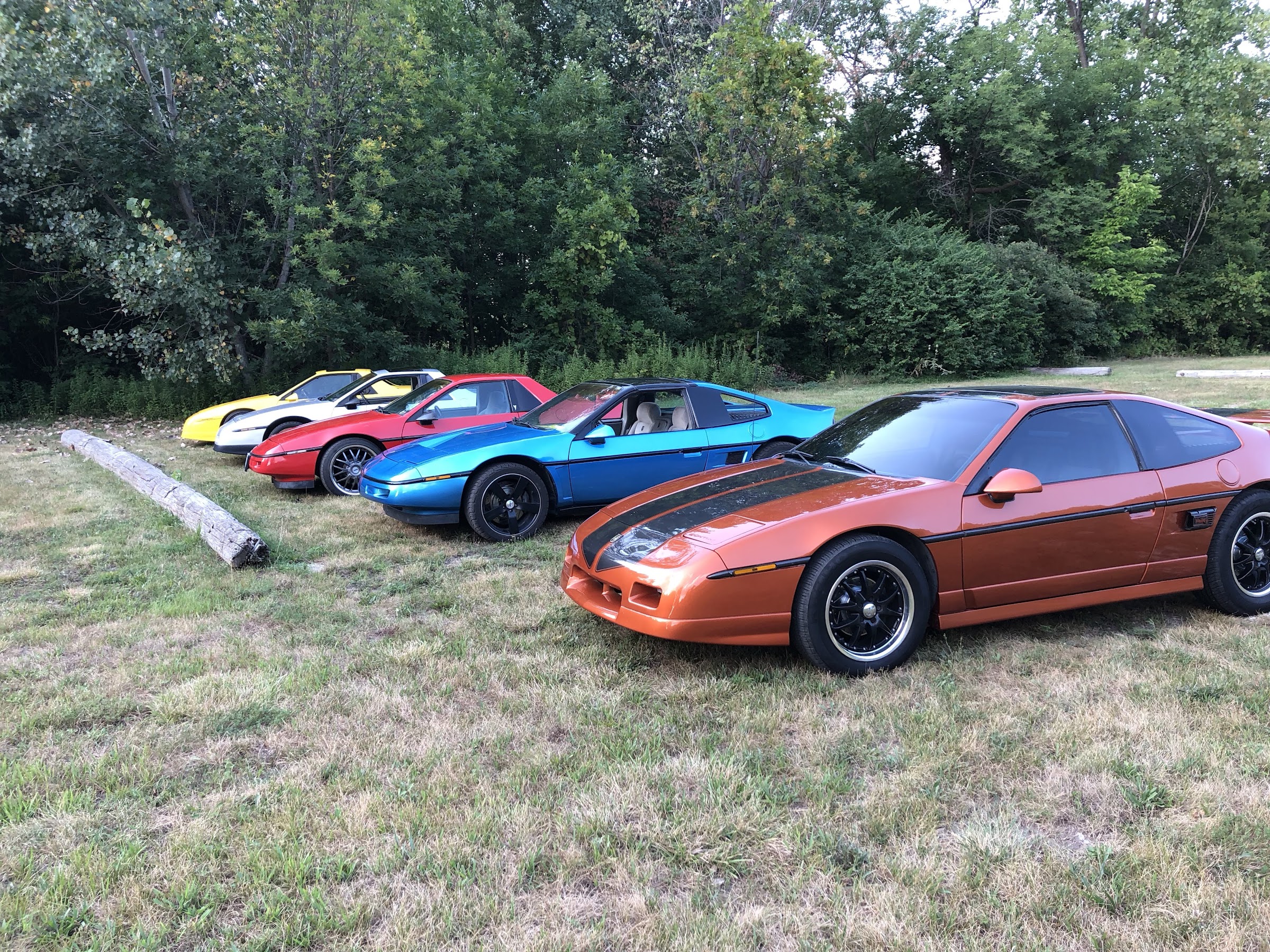 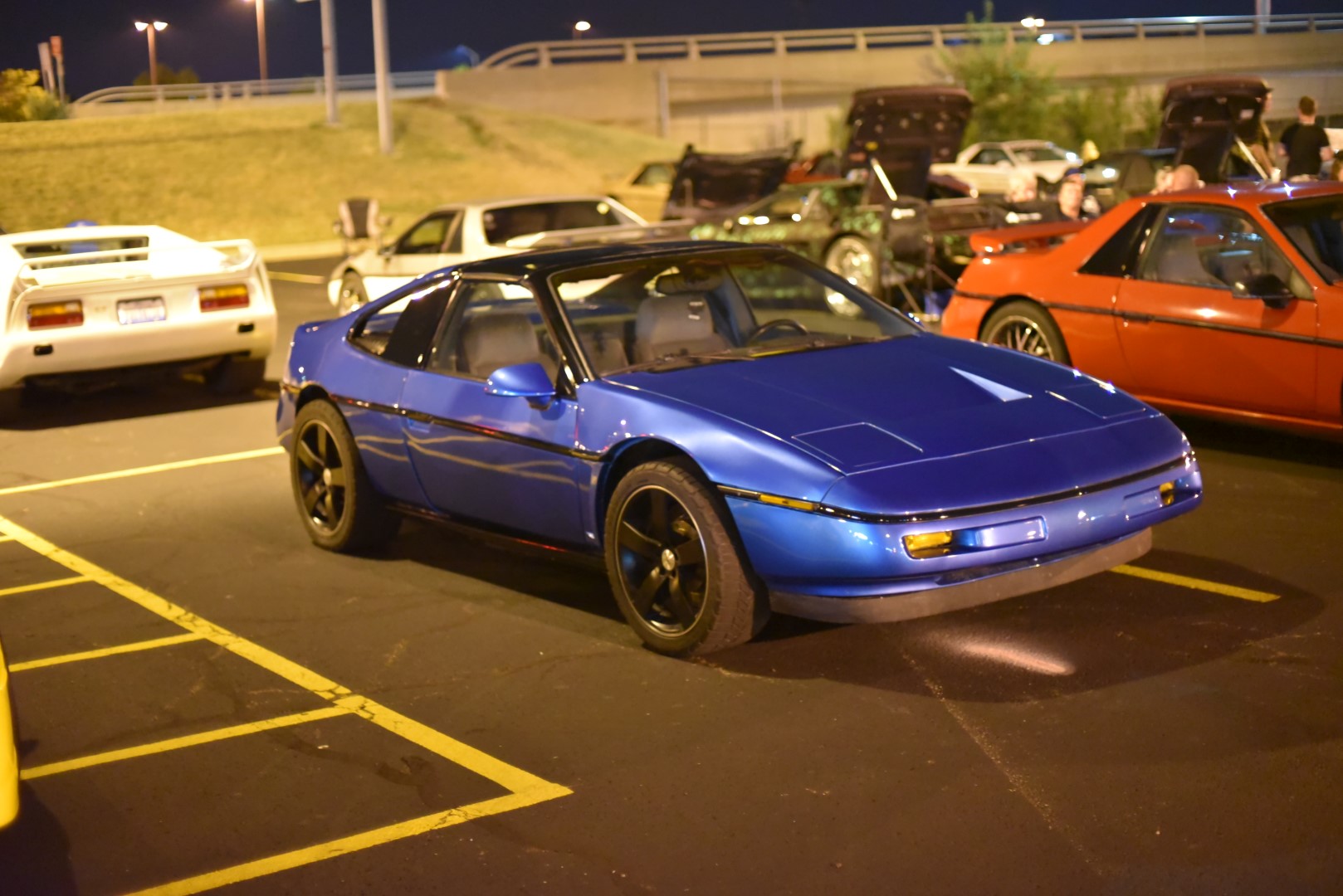 It didn't win any awards but got plenty of attention. Loaded up, still with few miles on the new motor, it did it job and was ready for the long trip home. It would get called to save the day less than 50 miles outside the Hotel parking lot. The Yellow Fiero in the picture above started losing power and wasn't going to make the rest of the drive, so we swapped it onto the trailer and the Yellow Fiero owner got to drive the Ttop car the last 300 miles home and proved itself useful once again. Fast forward a few months and the car continued to treat us well, and was doing better but still randomly cutting out. Never the less it made the first annual Kansas City Fiero Owners Group trip to Eureka Springs, AR for some spirited driving in the Ozarks: 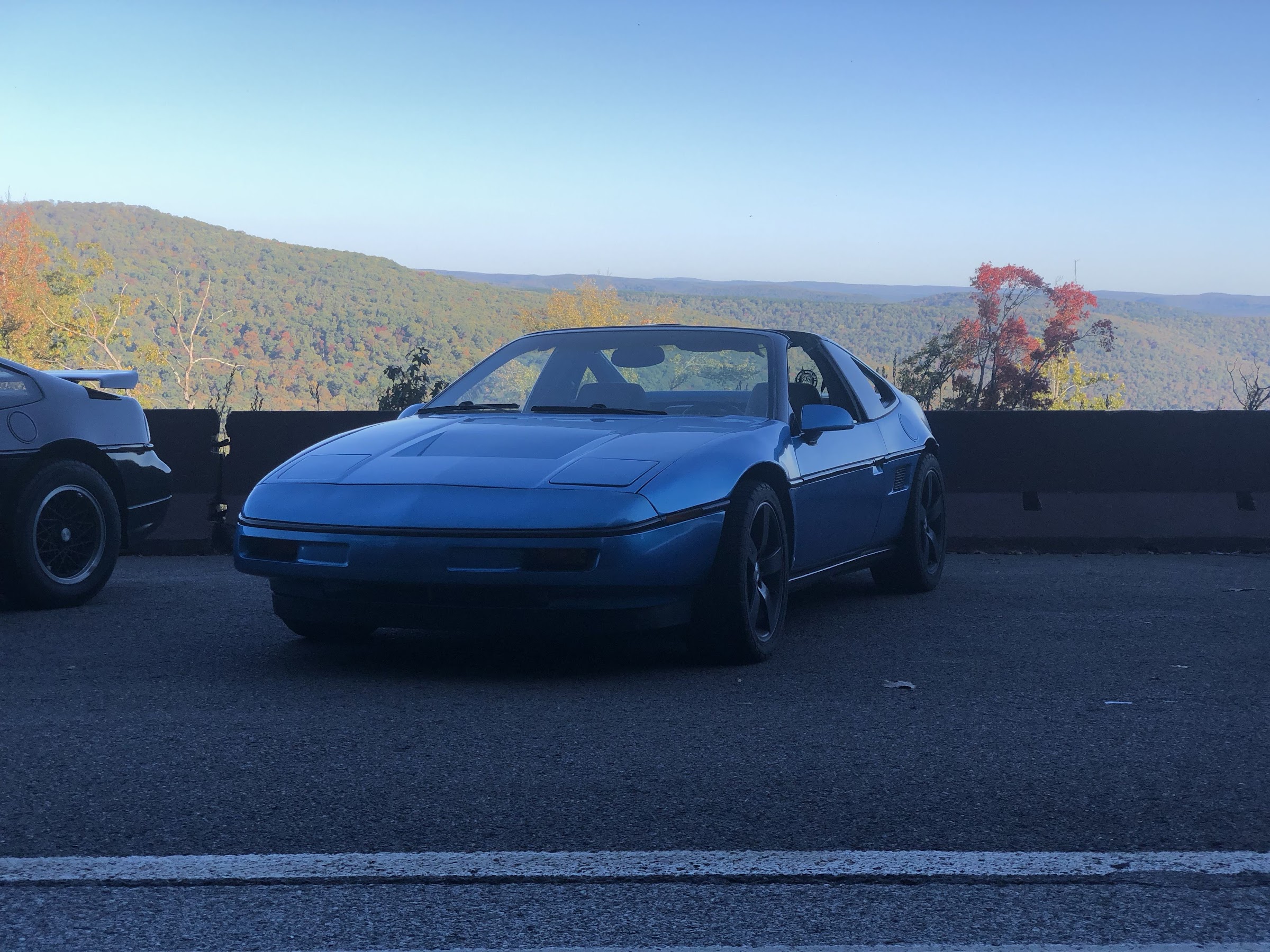 It was fun to reflect on the car through out all of this, we had gone from a car that was under powered with an automatic, to a poorly painted GT with a manual transmission, to a nicely painted GT that couldn't drive over 60mph, to a wrecked frame picked down to nothing, then to a skeleton car that could drive, then a premiered car that sounded awesome but cut out so much it killed the fun, lastly to this beautiful blue custom Fiero we could only have dreamed about leading a pack of 8 Fiero's through the mountains. It was a great place to be, but if you tried to give it too much throttle it was buck hard enough to make your heart skip a beat. It was personal now, we couldn't let the car defeat us, we built it we wanted to enjoy it. As luck would have it we decided to switch from using the 7 pulse VR based crank position sensor on the side of the block to the 24 pulse sensor in the crank pulley and it ended up being a Hall Effect sensor that plays much nicer with the Microsquirt. While building the new wiring we found a broken wire at the crank sensor wiring tucked deep in the tape work. The tape was the only thing keeping the car driving, allowing the wires to just barely touch, but enough to run and when you pushed the car hard enough the flex in the bushings would pull the wires just enough apart for it to cut out. The Fiero now had a more precise crank trigger wheel, with a more precise signal output and was running the best it ever had. Naturally it was at this point I decided I wanted a VR6 in the car and fitment began in a mock up car. Before the drivetrain was pulled the KCFOG had the honor of displaying our cars at the Kansas City Auto Show. The car was cleaned up and pulled out of storage in some icy weather: 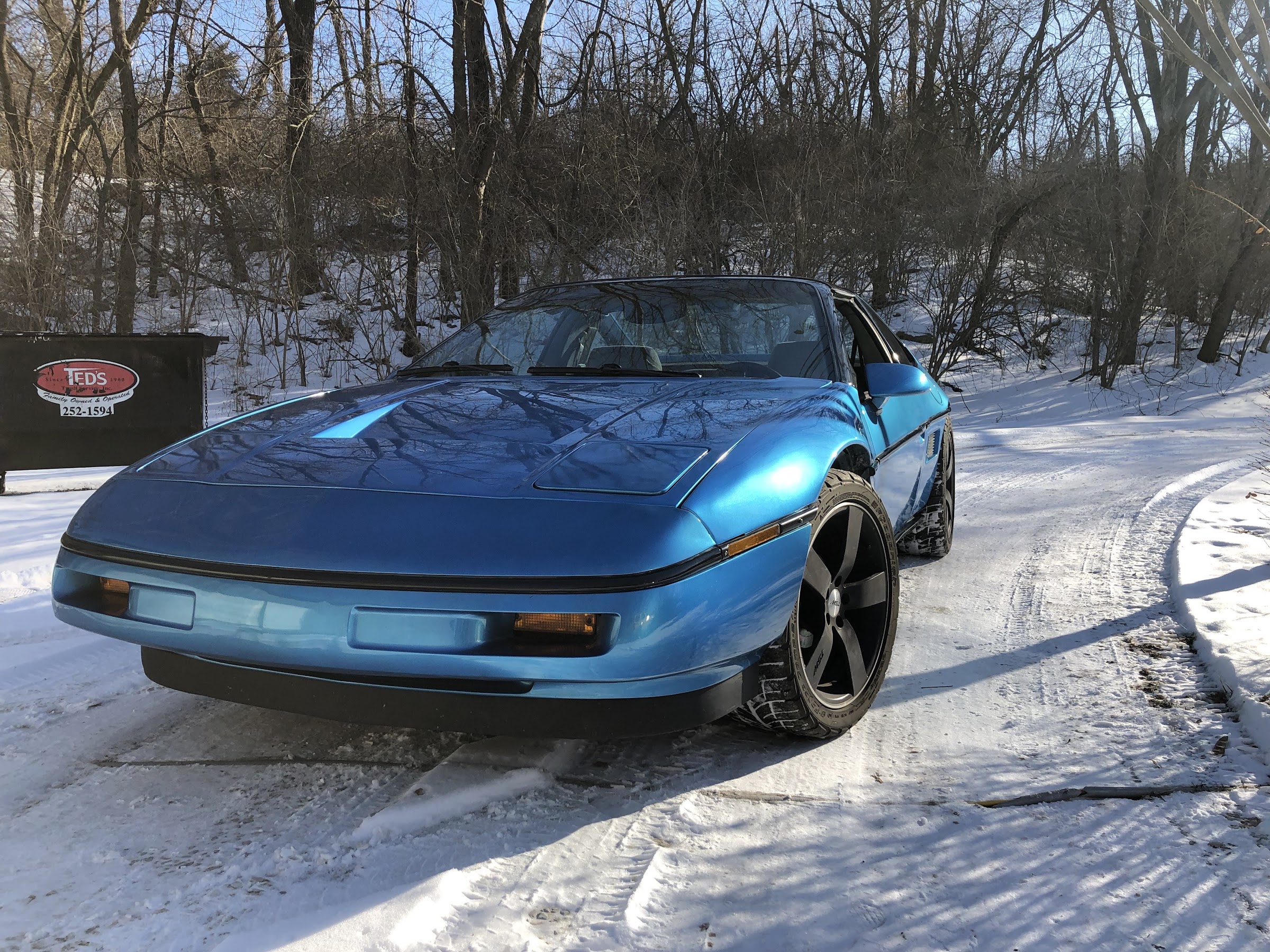 Then it was put on display for the last time with the GM heat in it: 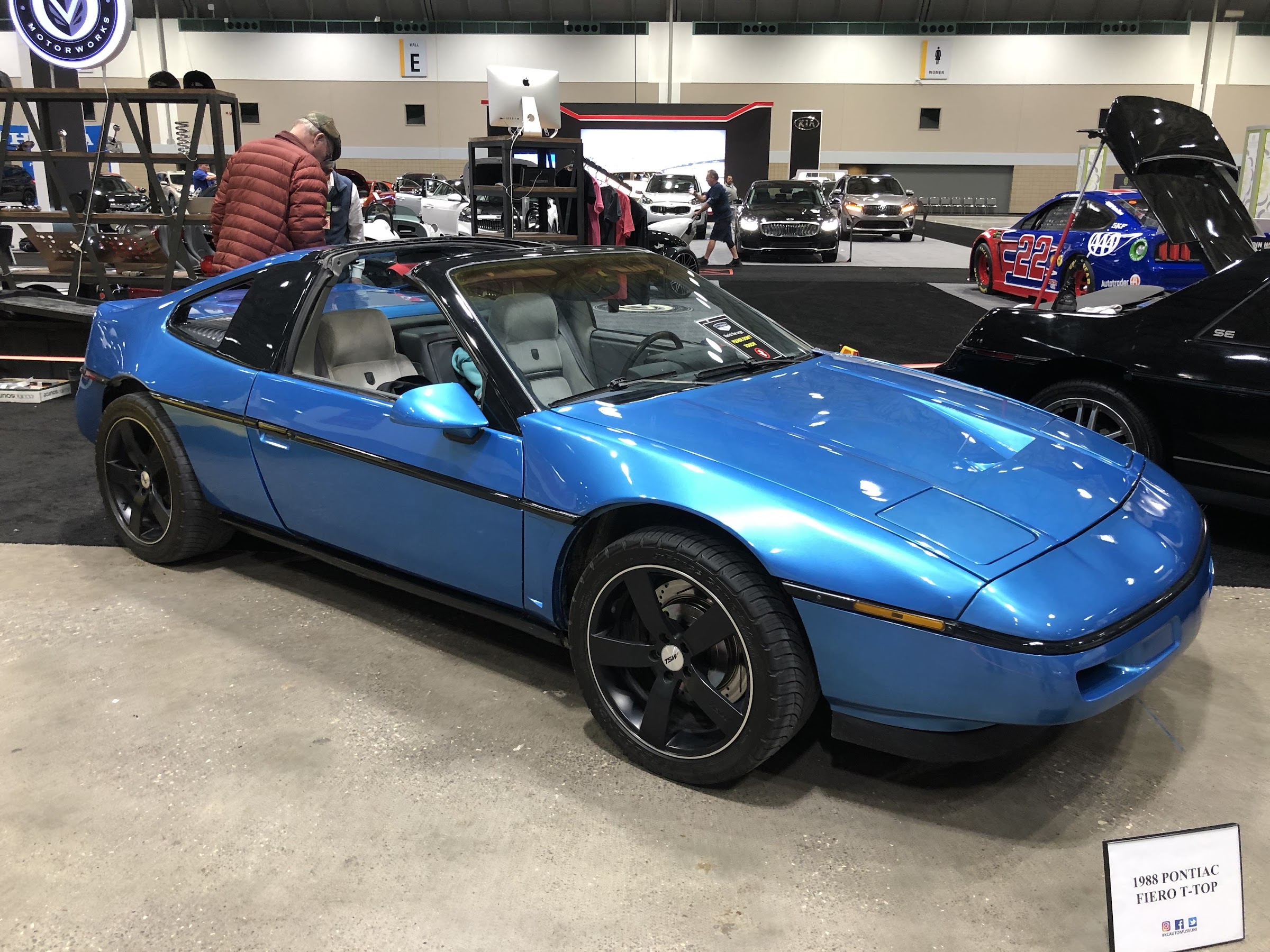