From the beginning of this project one of the things that was crucial to making this all fit and look good was the use of an Audi FWD manual transmission. The AWD transmissions used a central differential placed at the end of the assembly and therefor added significant length to the assembly that I didn't have to spare. Some might have noticed in the background of some of the early pictures I had a US spec FWD Audi A4 01x 6 speed manual transmission. The 01x transmissions are said to not be as strong as the 01e transmission found in the B5 S4, and some other audi cars. That being said for my application, power goal, and overall weight of the car the lower potential power rating wasn't a problem, what was a problem was the shallower bell housing of the 01x and the lack of flywheel options for the W8. Lack of flywheel options might be an understatement, all that was available was a factory replacement dual mass flywheel, and I prefer to not use dual mass flywheels on performance cars. Then add in that its a low production engine option, with lower numbers being manual, with lower numbers even being driven long enough to need a new flywheel and clutch set up, the replacement dual mass flywheels were not available at the time. We will get back to that, but first this: 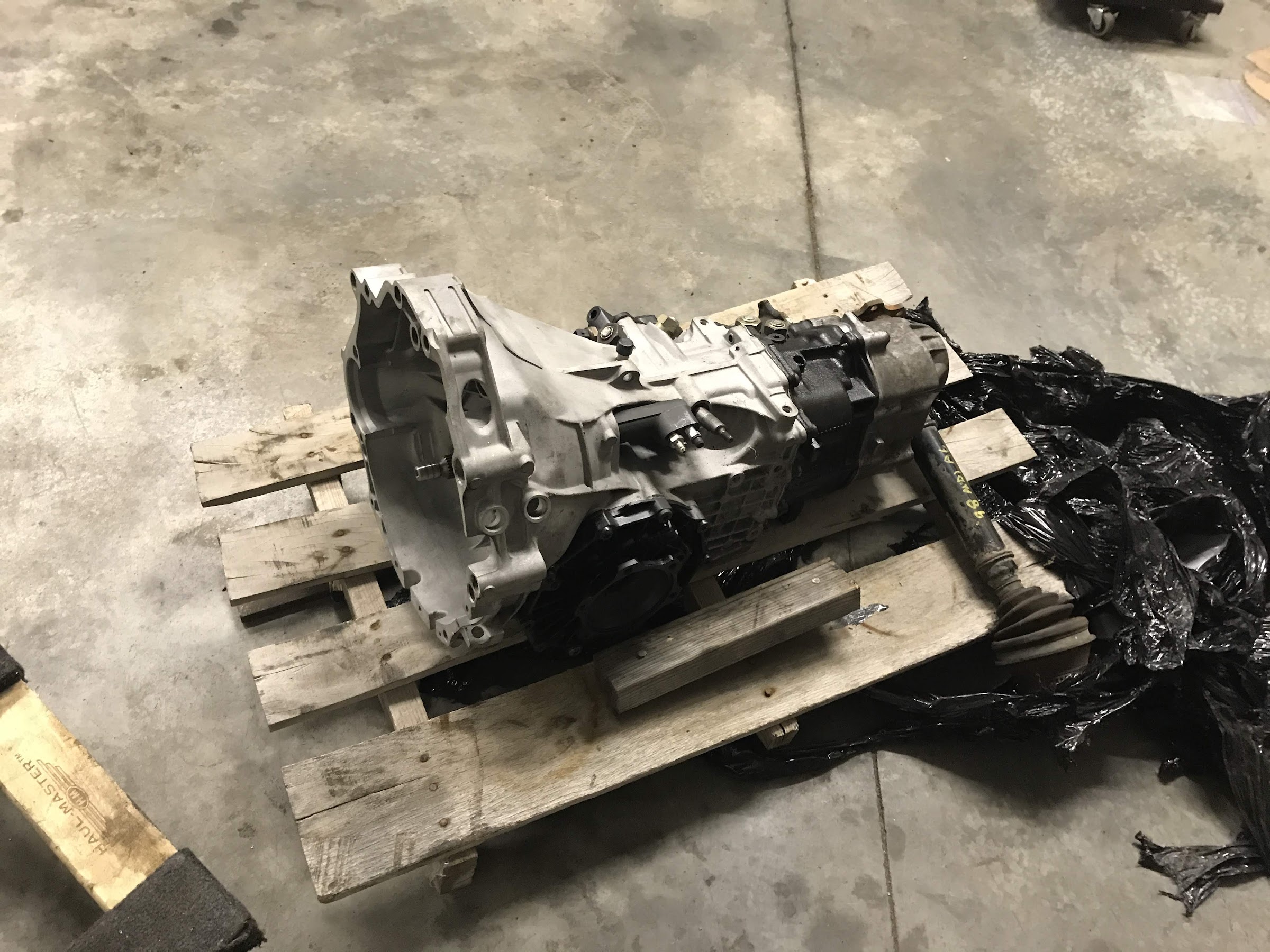 We had an 01x, we couldn't fit a flywheel with the proper crank trigger wheel, we had a US AWD 01e for mock up, and the best part was we knew in Europe the 01e used in the A8 with the v8 TDI with a fwd 01e, but thats Europe and not exactly next door. This is where Advanced Automotion (https://advancedautomotion.com/shop/) comes into play. I got ahold of Scott who imports, rebuilds, and upgrades a number of unique TDI bits and specifically 01e transmissions. He offers TDI gear sets, LSD differentials, and most importantly FWD 01e gear boxes for unique mid engine builds like my Elise. So what you see on the pallet is just that, a TDI European spec FWD 01E thats been freshly rebuilt and looked over. Which let us go from this: 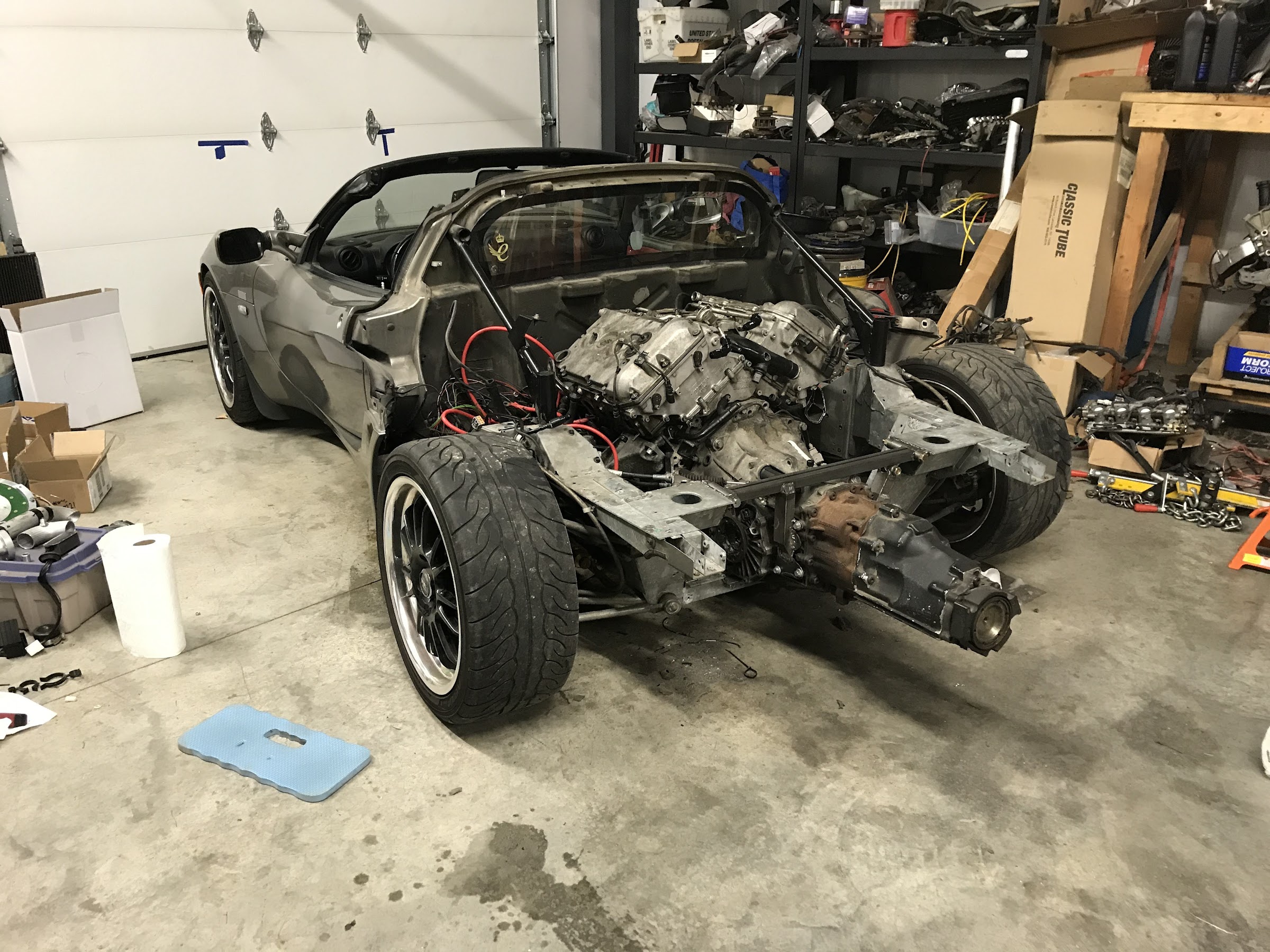 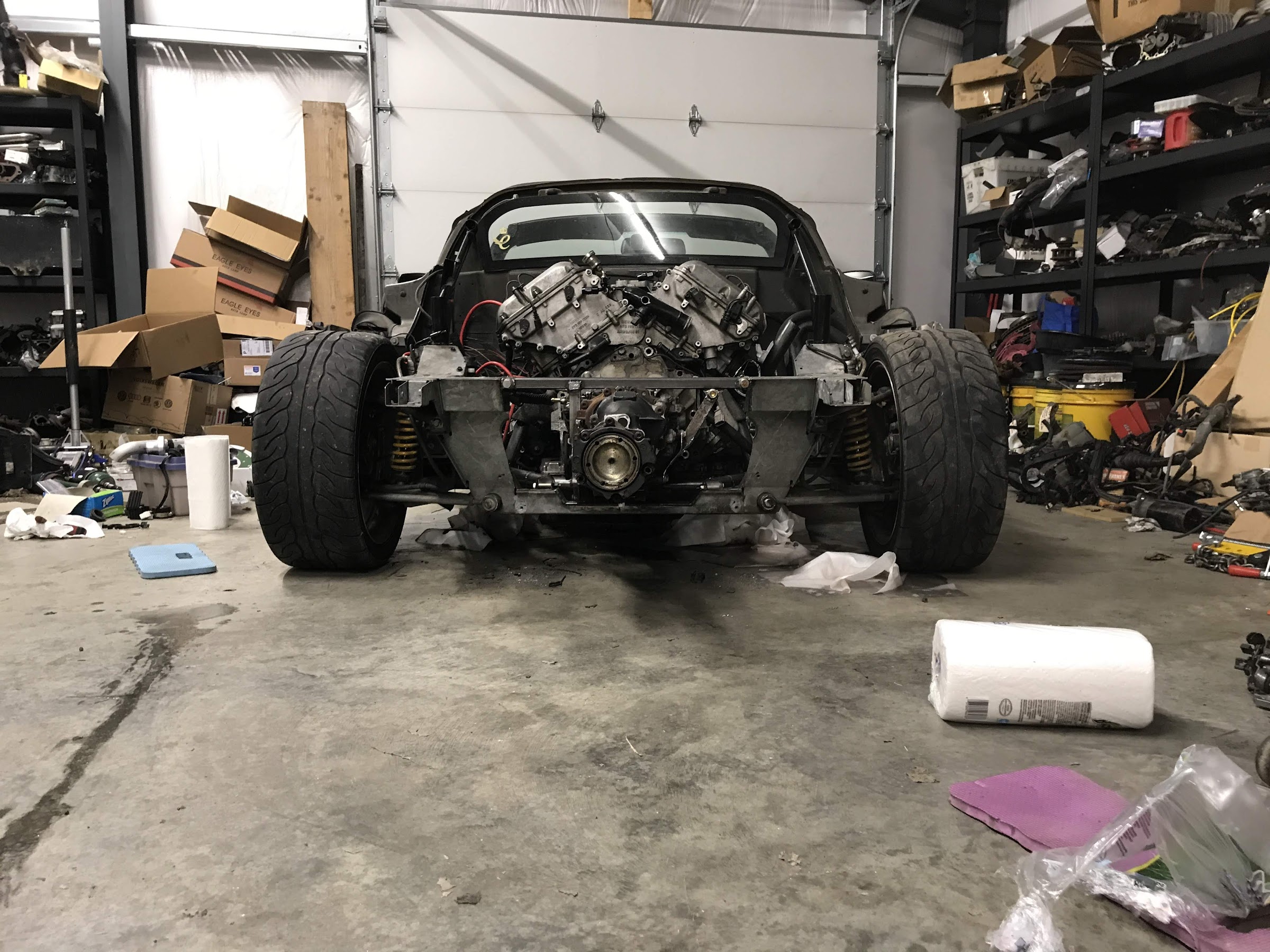 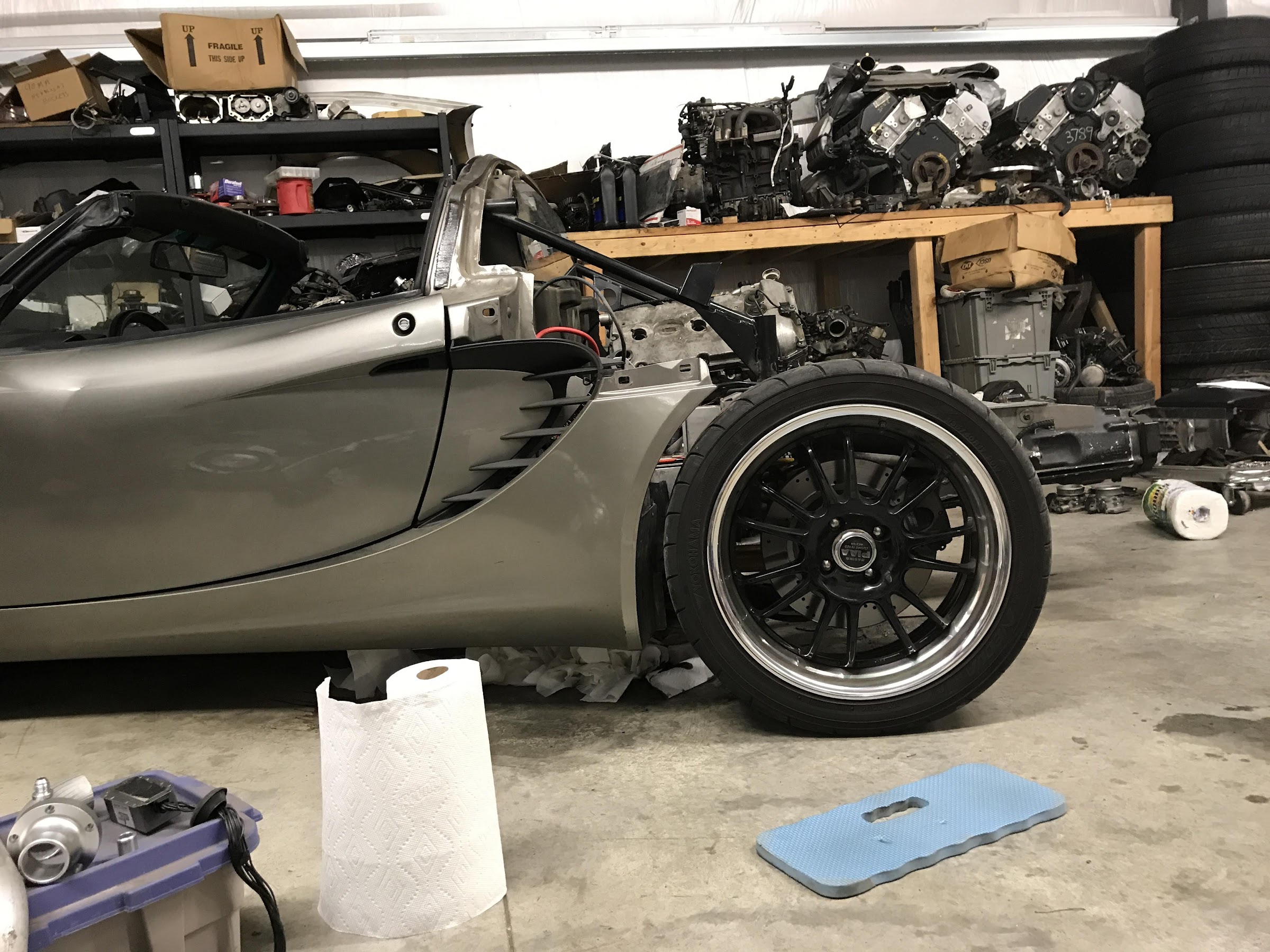 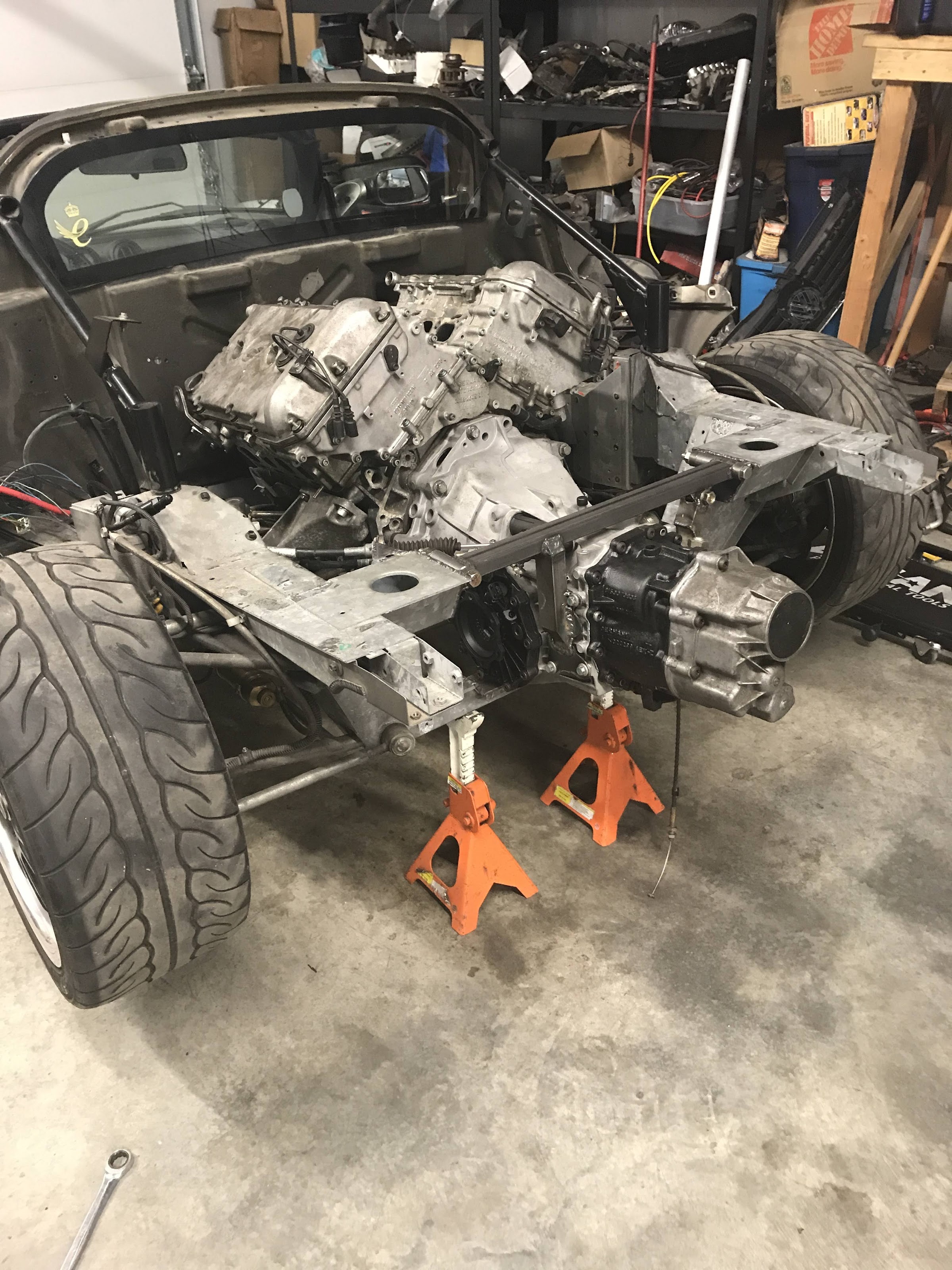 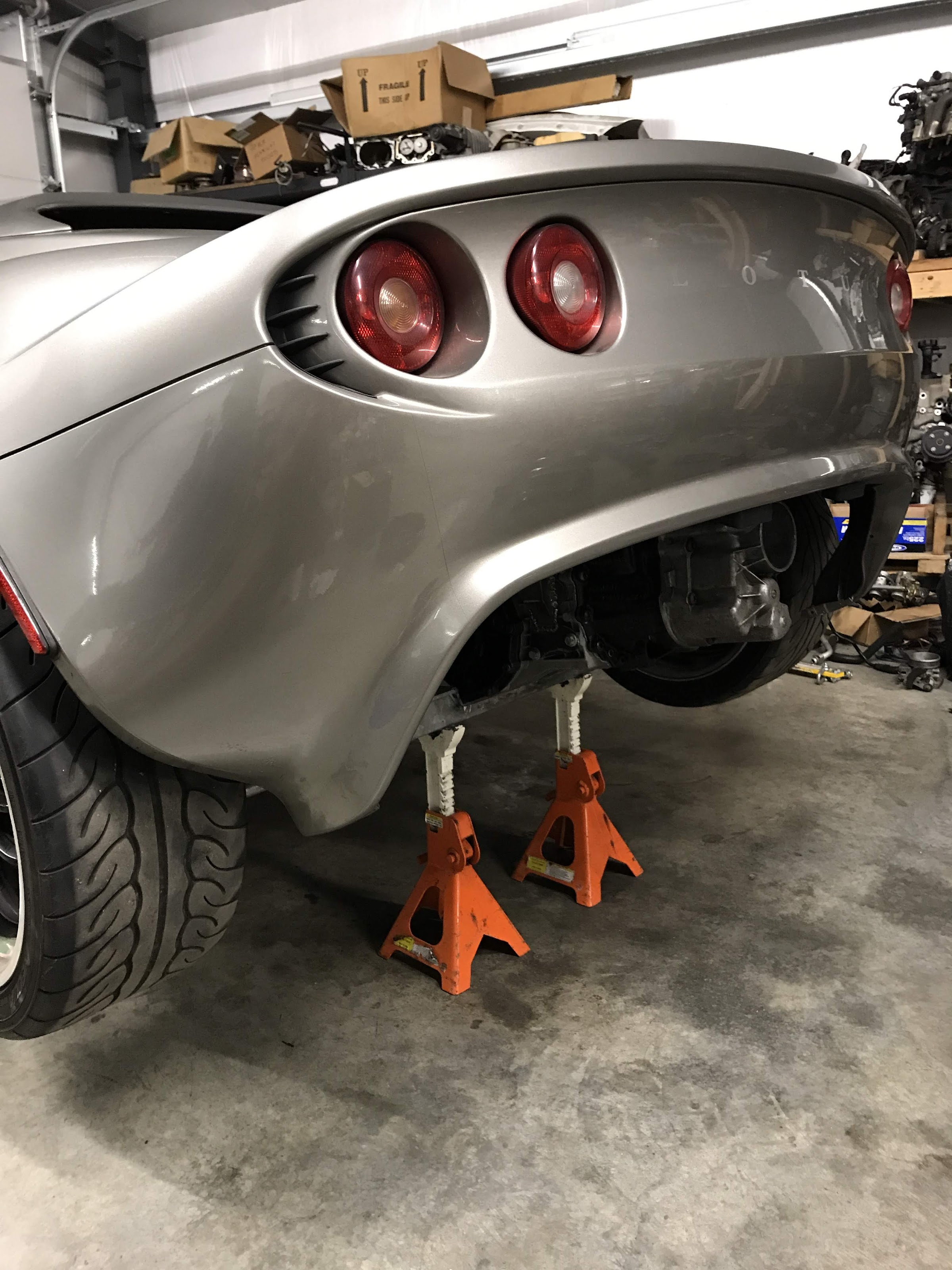 Just look at this clearance! well, it is touching, but thats very very minor: 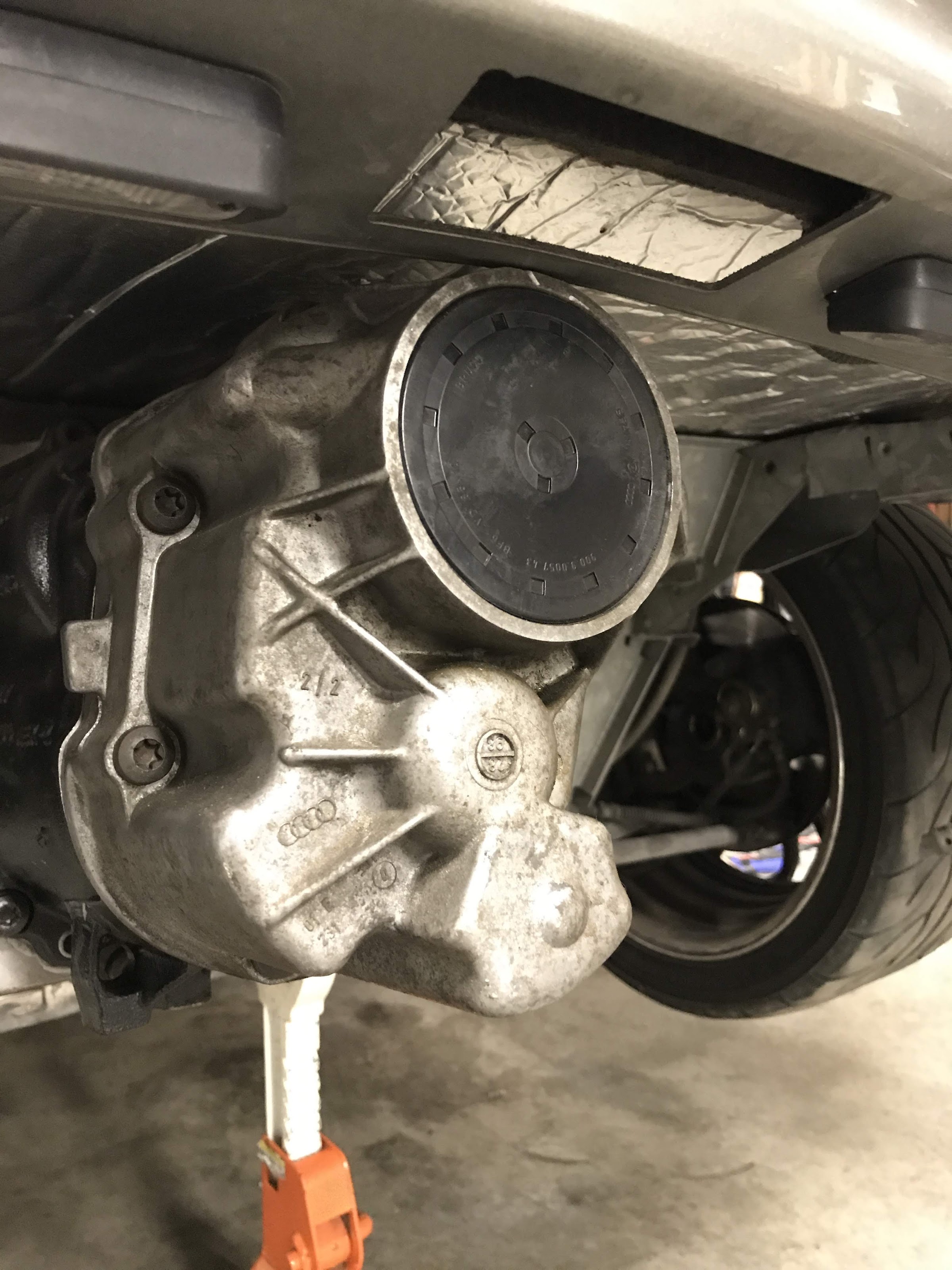 Lets get back to the flywheel now that we know what transmission we are using. The 01e transmission is a dual bellhousing pattern transmission, with the 4 cylinder (NA, Turbo, TDI, FSI, TFSI) pattern as well as the bigger motor (30v V6, TDI V6, 4.2 V8, W8) pattern. Depending on the motor they used a spacer was implements to help push the smaller(usually v6) motors a little farther forward. We chose to modify a B5 S4 aluminum flywheel and clutch combo for the build, which meant we needed to use the spacer, our axles are already at a crazy angle the extra 3/8" wasn't going to hurt anything. As all steps have their hurtles the W8 is a nice and unique setup that uses a 10 bolt flywheel, is shared with the Audi RS4, but not much else. Given the face that I needed top place the flywheels in the exhaust right spot for the S4 clutch and go to the 10 bolt crank (vs 8 bolt on the 2.7l S4) a flywheel was purchased and right away the center was machined out and a replacement puck was machined to fill the void. But wait there's more! We weren't able to get W8 flywheel bolts instead we got 10 2.7l S4 flywheel bolts, but no dice, the heads were too large to 10 in the circle where 8 were designed to fit. By this time we had added a small lathe to the shop and it made quick work of making the bolt heads just a bit smaller: 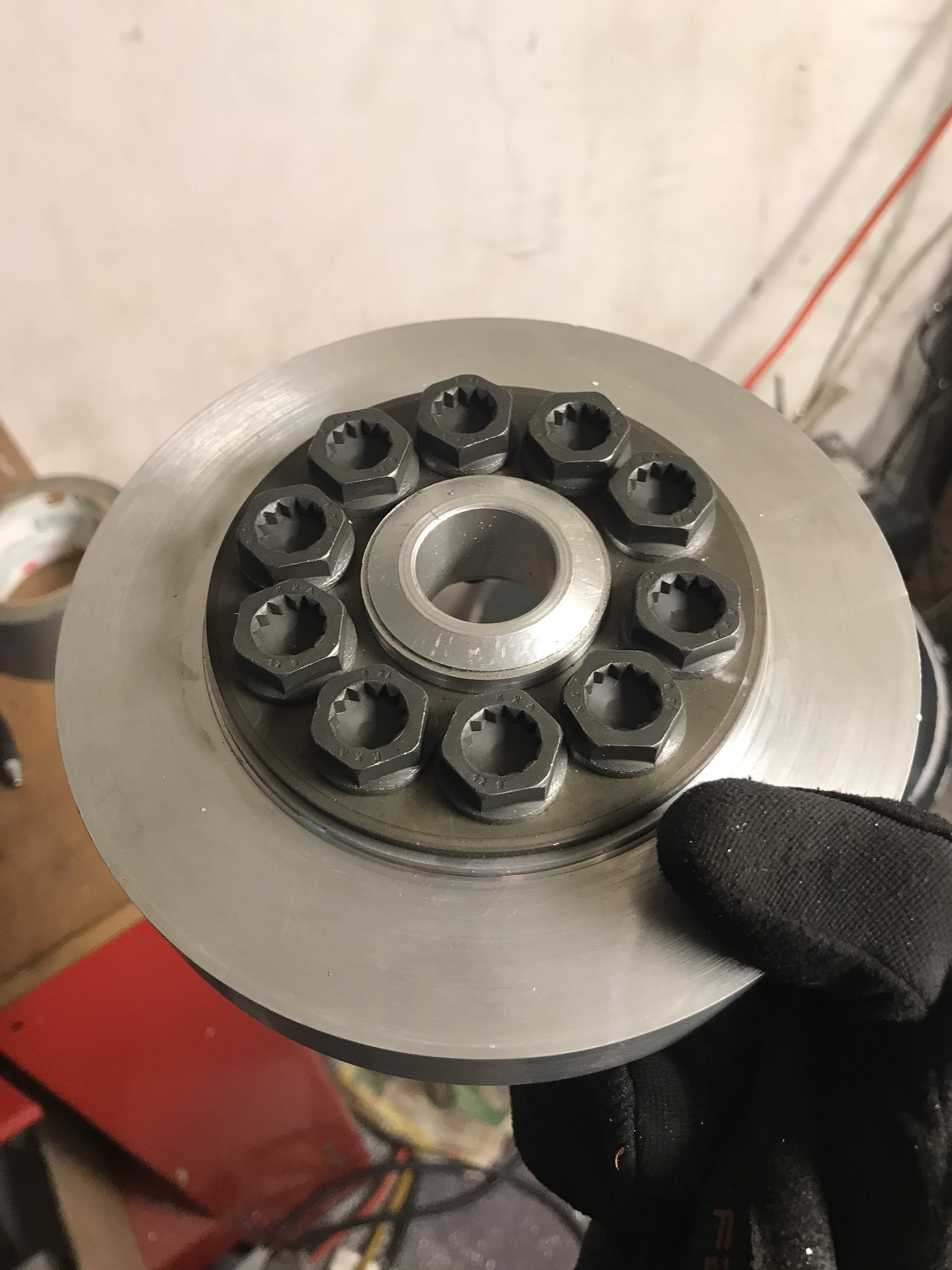 With the center machined to fit the Audi pilot bearing and the flywheel machined for the adapter puck a test fit was done: 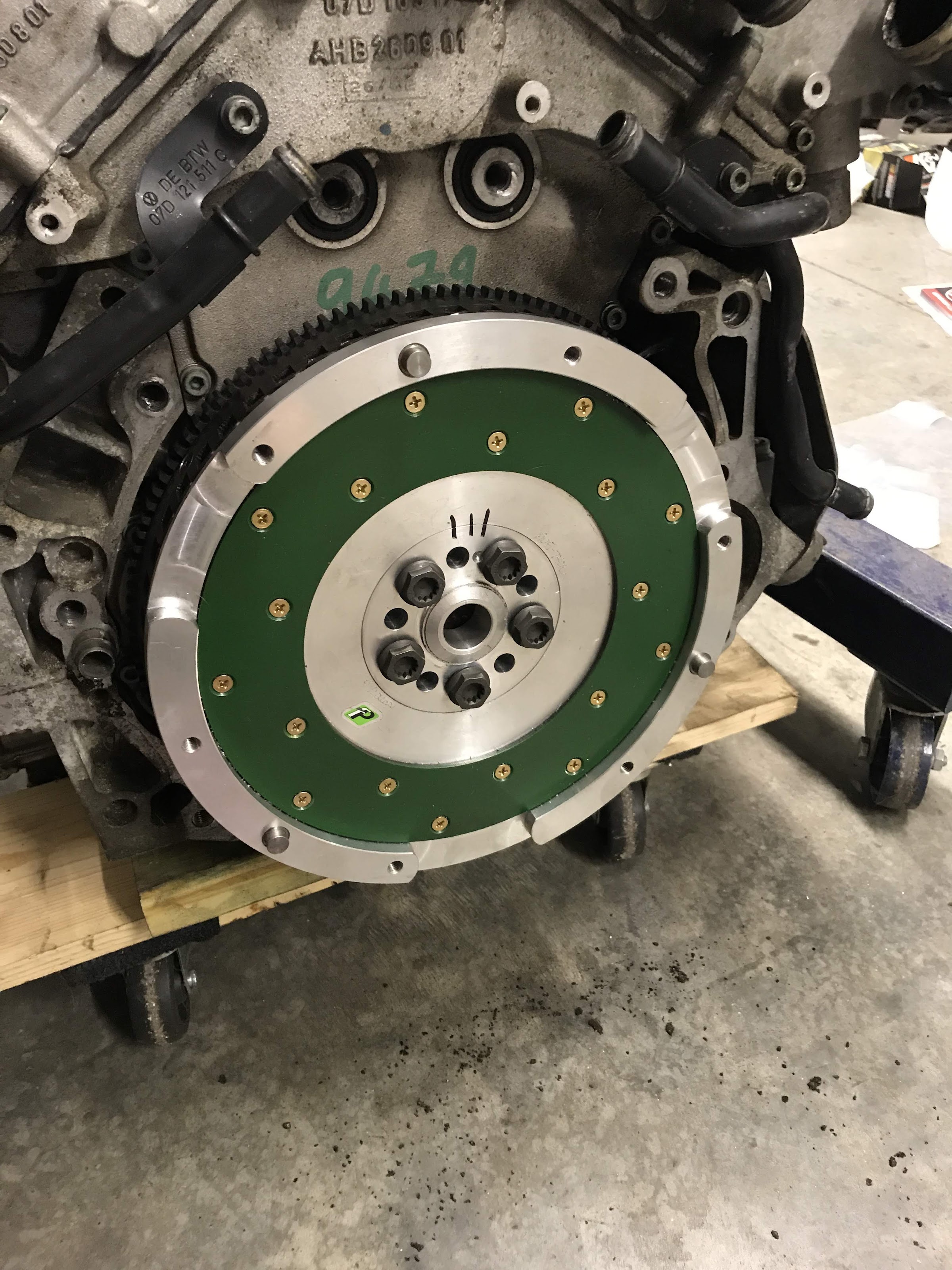 With multiple recommendations rather than welding the pieces together it was decided to bolt them together. An even pattern was marked out and drilled through and the pieces were mated together: 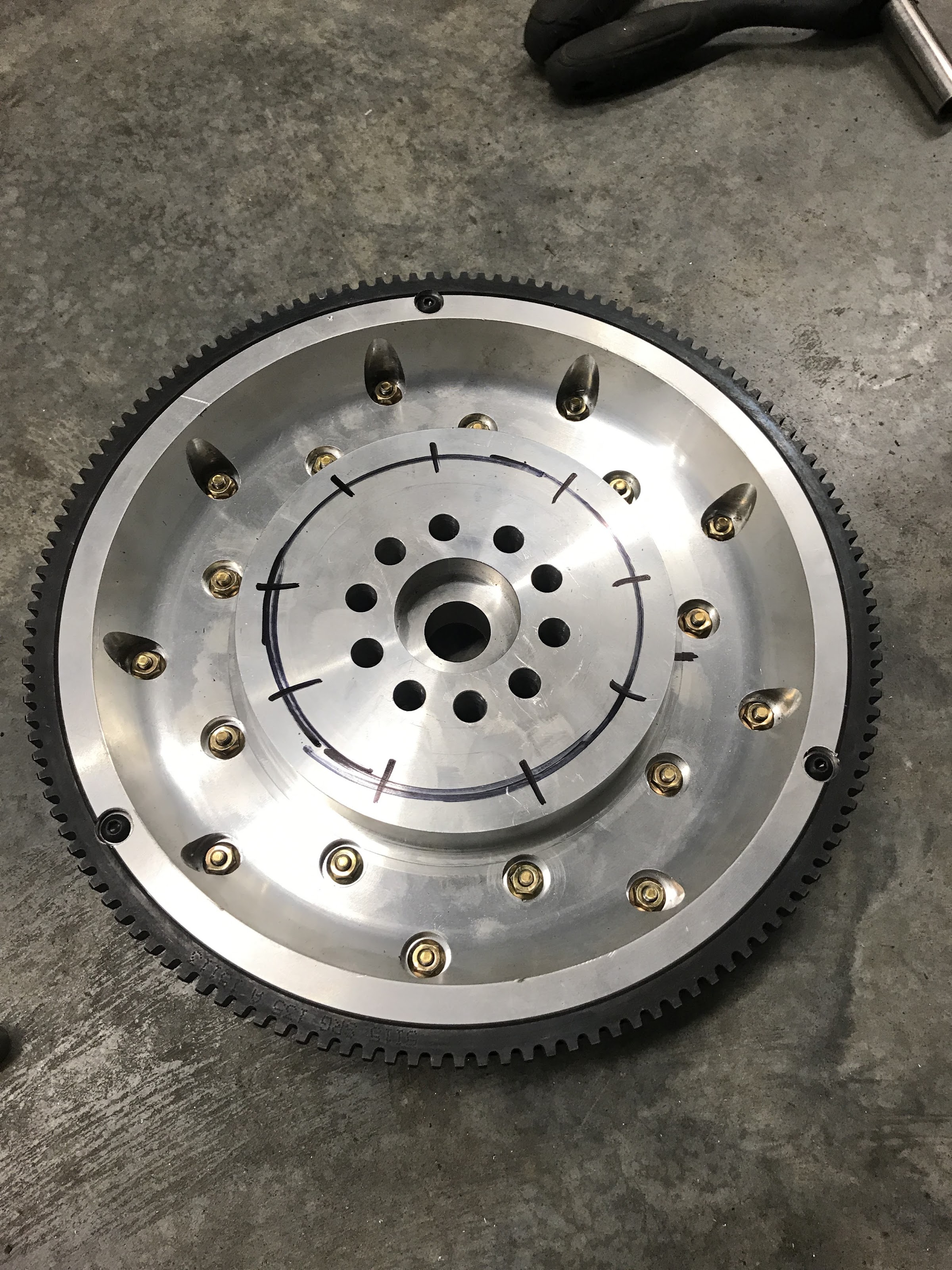 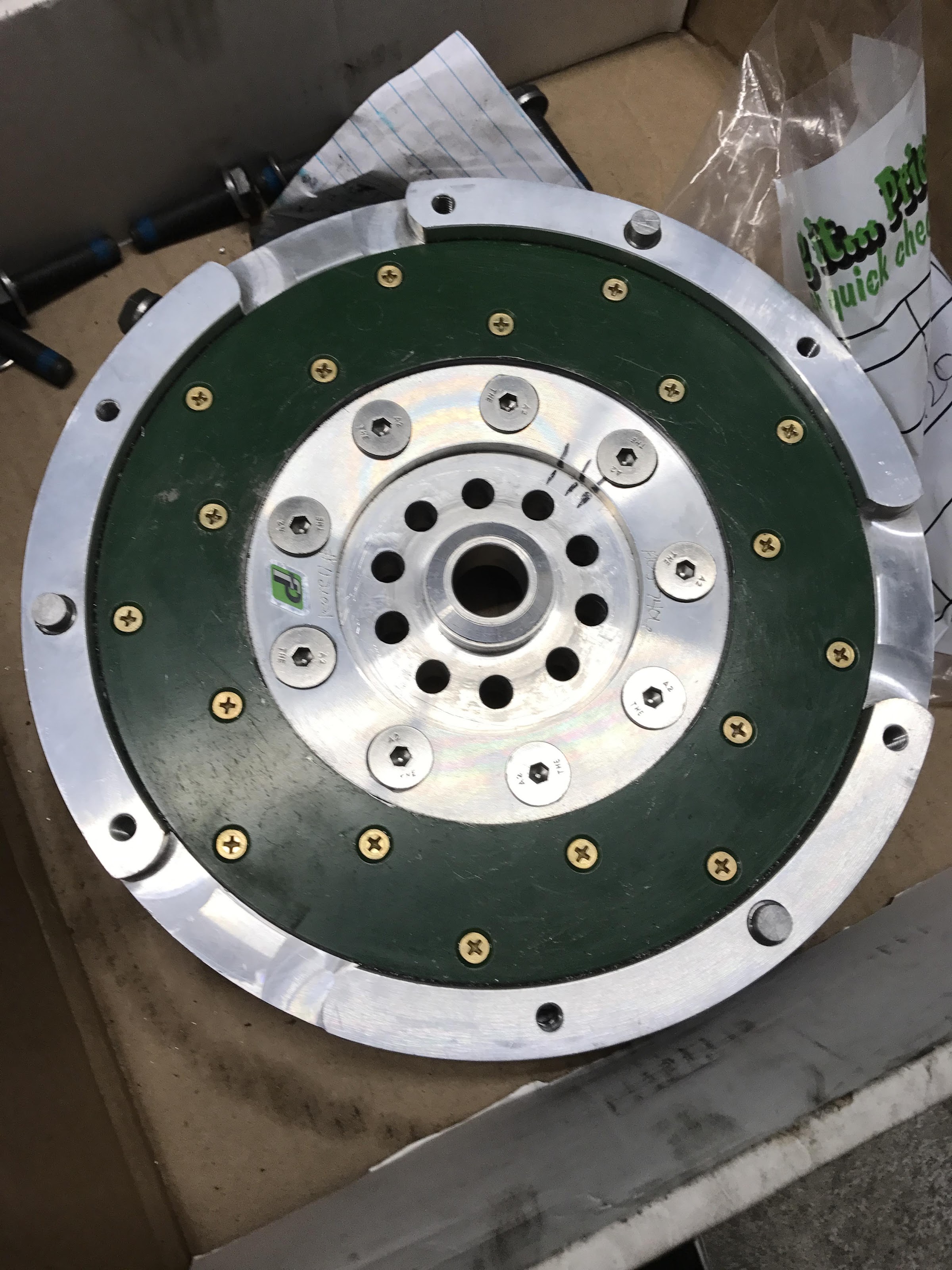 At this point the motor spins up with starter and the engine and transmission were mated together and ready for install.