As we've talked about some of the known problems with the W8 one that has to do with the coolant system is the thermostat. Now most thermostats are simple and cheap, they use a brass cylinder filled with wax that prevents a spring from pushing on a plate that prevents coolant from flowing when its cold. Some motors these days use a cast housing and have the thermostat factory installed into the housing and are not considered rebuildable or serviceable item. This is where we sit with VW on the W8 but it gets even better, VW decided that they wanted to let the computer control the opening of the thermostat rather than coolant temperature alone and replaced the wax cylinder with a heating element to control the opening and closing of the thermostat. Then the plot thickens one last time, back in the day when the thermostat was closed and the heater was turned off the motor had no fluid flowing through it all, everything was stagnant and it often required the heat to thermostatically flow through the system to eventually heat the thermostat causing potential hotspots. Modern day thermostats will often have a secondary plate at the bottom of the thermostat: 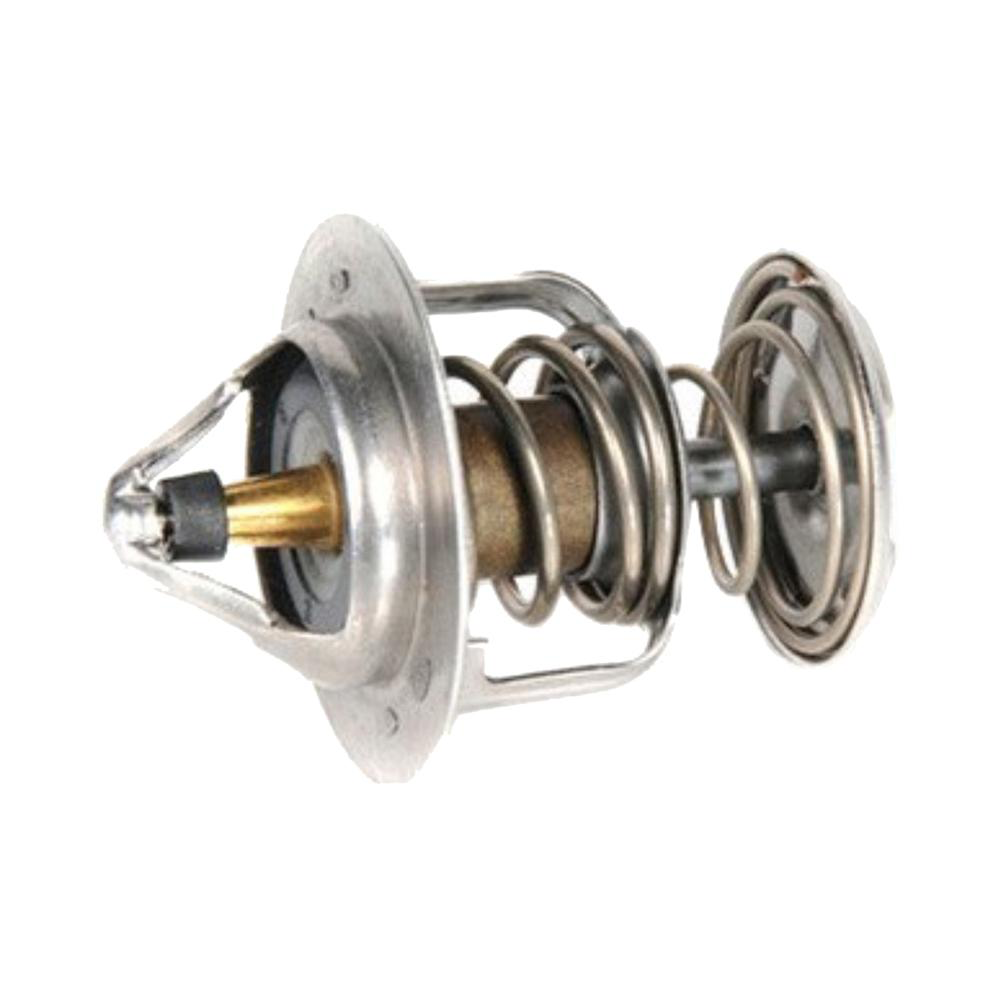 The idea behind this is they provide a bypass loop when the thermostat is shut for coolant to flow through the engine block circulating coolant all the way through block heating it up evenly and then the aforementioned plate will plug the bypass loop when the motor is at temperature and allow all coolant to flow through the radiator. Here you can see the hole of the bypass loop in the valley of the cylinders under the thermostat housing itself: 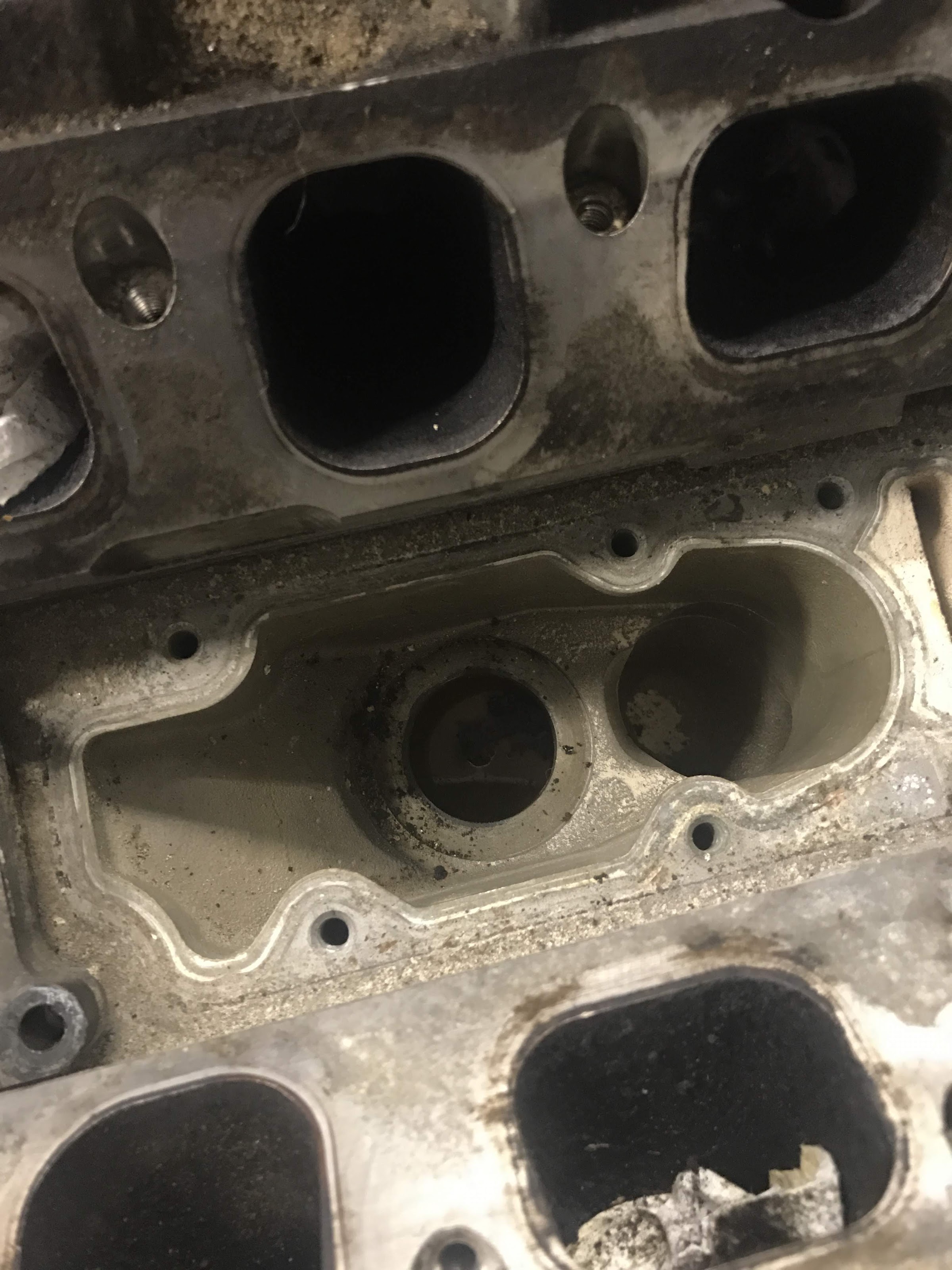 So why is all of this a problem? This thermostat fails and is complicated enough that the aftermarket replacement is upwards of $400 and to top it all off with the use of a stand alone ECU there is no way to control it, well thats not true, Im don't want to have to figure out how to control it. So we took the stock housing and removed the thermostat itself and put a freeze plug in the block with a small hole drilled in it to help circulate the cool where the bypass loop was since we would have no way to plug that with my remote thermostat. We then extended the water neck down to the lower side of the motor to allow me to get to the clamps and have the thermostat housing easily. 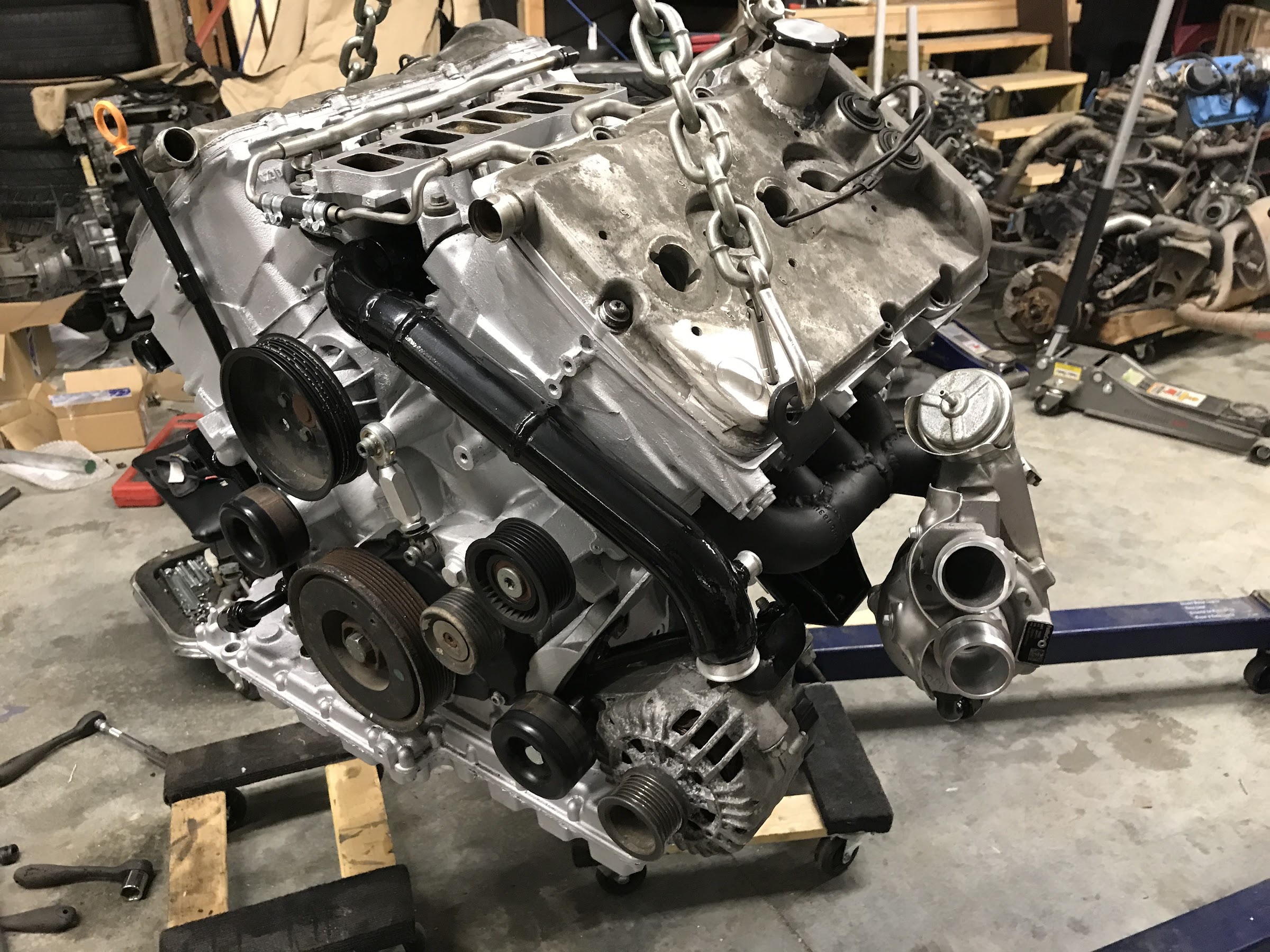 Then on to the back of the motor and the multiple coolant outputs. Everything was simplified where it could be with all extra fittings removed and welded shut, the heads have a large output in the valley with a small output on the back of each head. The head outputs were run to the heat core input and the large center outlet was run along the back of the motor up along the head and to the passenger side coolant line to run to the radiator in the front: 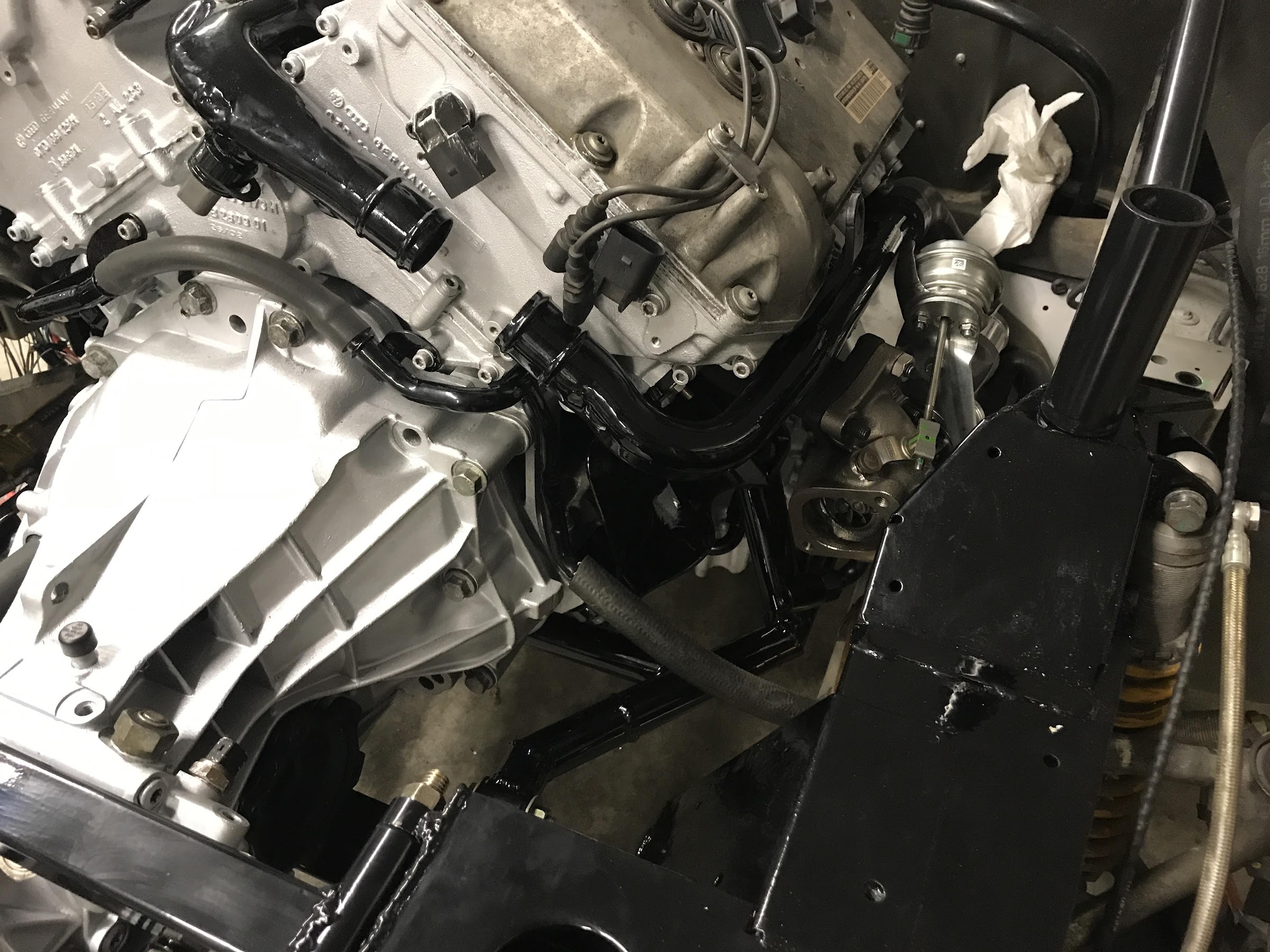 At this point we have a cold feed from the radiator being controlled by a remote thermostat at the front driver side with the heater core return coming in just after the thermostat housing itself with all of this going into the motor. Then it all comes out the back and proceeds to the passenger side. Now there is a problem with this, the Lotus originally used the exact opposite layout, originally the driver side piping was the hot side and the passenger the cold side: 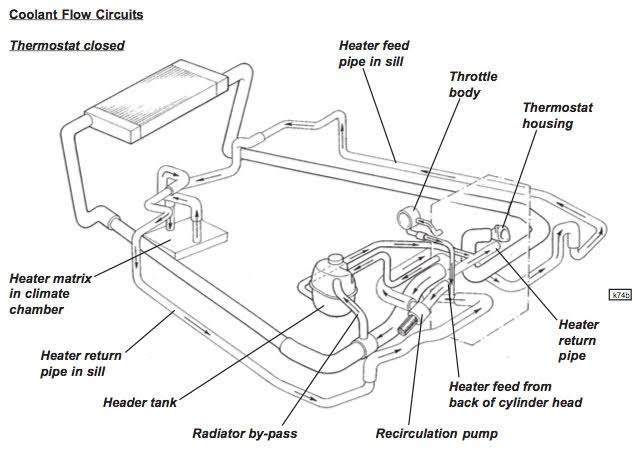 We will be running the system in reverse of this, while most cars would need the hoses flipped back around at the radiator to keep the hot coolant rising naturally with the radiator the Elise has a nearly flat mounted radiator with a special hose with a bleeder in it for burping so now my will running hot water rear to front rather than the factory front to rear. The system is finished up with an expansion tank mounted opposite of the fuel surge tank with vent ports run into from the heads and the turbos to help promote the coolant to naturally move up through the turbos as the motor shuts off. 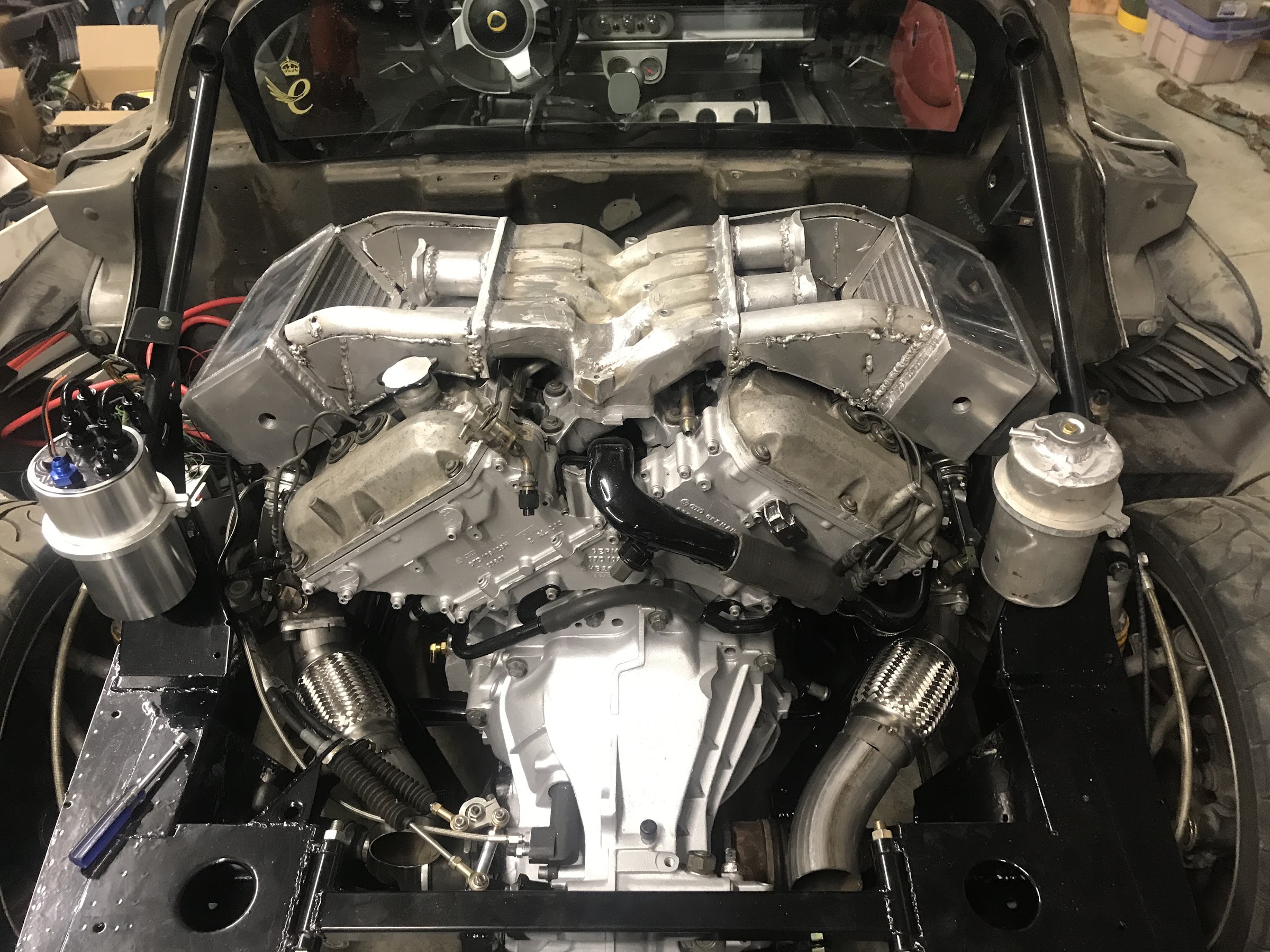 Thats all on the coolant for now, I will update when the turbo coolant lines get finished up.