It all started years ago with the love of the Lotus Elise Series 2, a dream or a fantasy of a car to own when I could afford it. The crazy thing was, by the time I could afford it, owning it wasn't enough.

We managed to find my Elise with a stroke of luck in Weston, Missouri about 45 minutes north of me. It was a car that had been on the market for a number of months based out of Texas and then Nebraska but luckily, just as we were about to fly to Arizona to buy a different Elise, we stumbled on this car for around the same price but with a turbo kit :)

Having read many many things on the lotus Elise and the 1.8l 2zz Toyota motor I didn't quite look forward to a gutless high revving motor but was excited when the turbo kit on the car hit full boost at 2500rpms and held it to 8300rpms, its quite a power band :) But it really wasn't enough, I grew tired of people wanting to see the Elise at car shows rather than cars we had built, it was more about the car and less about the build or uniqueness of "My" Elise.

So we started with a simple plan, don't touch the car for a year and then use the time to settle on what engine was going to go in it. Personally I don't like to build something that has been done before, even if it's a little bit of a twist I still want to make it my own. My first idea was pretty obvious, if you know me and my Vr6 turbo rabbit. I began the process of seeing if it was unique enough. After finding R32 swapped Elises and 12v Turbo Elises, I felt it just wasn't quite the path I wanted to take. So again with some luck I managed to get a 20v Vr5 engine shipped to my door. When you are working on an Elise you lack room and you want to add as little weight as possible. So I felt I was winning by getting one less cylinder, it really is a 24v Vr6 with a cylinder lopped off it even uses the same gasket/bolt pattern for intake and exhaust, it's just missing the last port on each. Its about 2.5" shorter in length and weighs almost 40lbs less. All geared up for the swap with the parts in hand, it would work out to be another year before I was close enough to swapping the Elise; when I decided this motor wasn't the one for me.

Now comes the W8, if you don't know the engine you might want to at least watch some YouTube videos of it to hear how cool of an engine it is. But please don't go much past that, with too much research you will find that there are only bout 1000 Passats in the states with this engine and people will tell you u how horrible they are or at least how expensive they are to own. With a $400 thermostat and a water cooled alternator I really can't argue with any of them, it really isn't an engine for the faint of heart, and really isn't an engine you would ever want to work on inside a Passat. But how often do you get a chance to get a flat plane crank 8 cylinder engine that is under 17 inches long in length and easily bolt to a transmission that can be made to work mid engine! So I set off on finding a motor and learning everything I could to know what parts need changed for the longevity of my future Elise heart.

Without too much time I managed to find a W8 Passat with an electrical short ready to be torn apart, and when I say apart I mean exactly that, a whole bunch of stuff has to come off or be cut off to make getting the engine out even possible! Even to today, this was one of the harder parts of this whole swap :p Now with a motor and transmission on the floor I put things together for the first pictures of the two parts trying to get a perspective of what was to come... 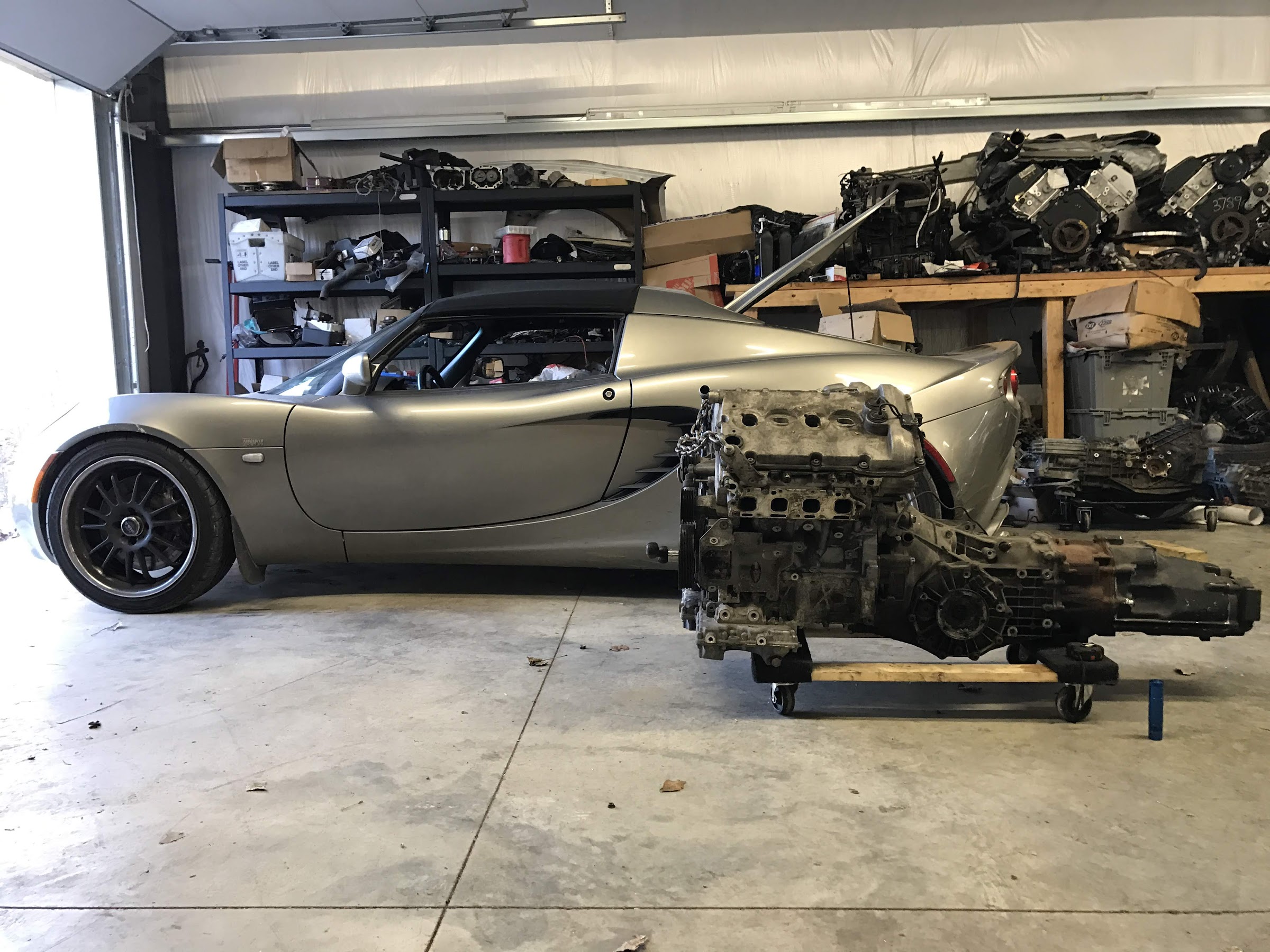 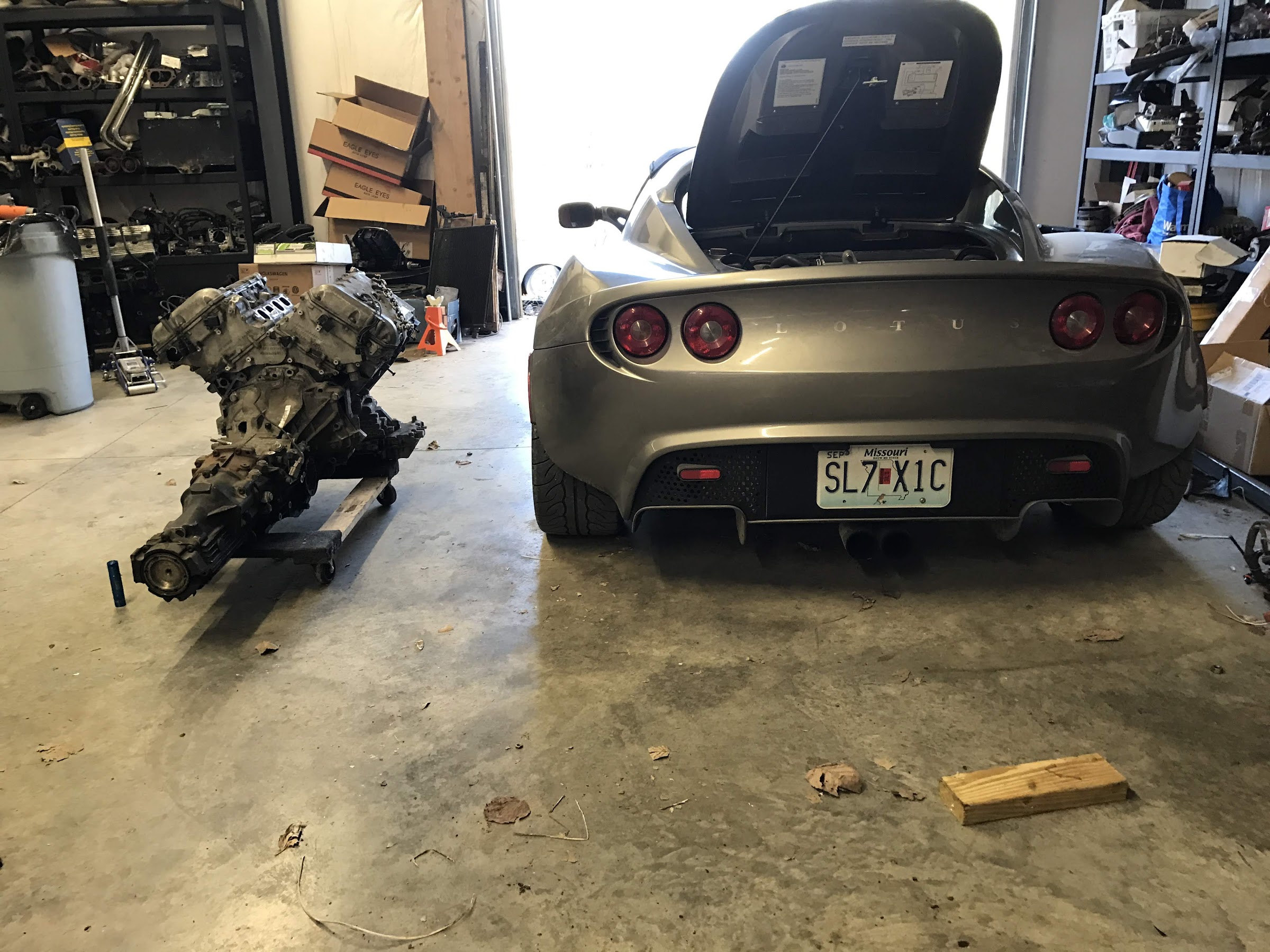 I will be doing everything I can to get updates daily on the build to try and get everybody caught up to how it is currently so please check back in often :)